Over 800 people cycled from Cambridge to Reach Fair on Bank Holiday Monday as our guided ride returned after a three-year gap. With no rain, wind or intense heat, the weather was perfect for riding and cyclists of all ages enjoyed pedalling through the Fenland countryside. 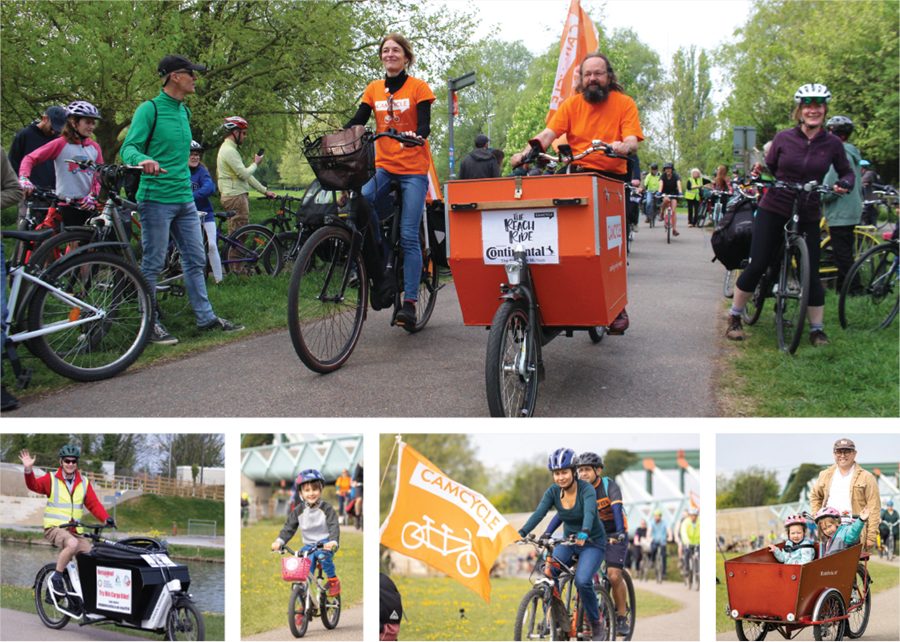 In 2022, a record number of Penny Farthings took part – six, including one rider who had travelled up from Kent! – and there was a notable increase in family cargo cycles including many trailer bikes, tandems and triplets. The youngest participant was Mila, aged 9 months, who giggled and napped in her family’s new trailer. Teal, aged 5, was the youngest to pedal independently all the way to the fair, a particularly impressive achievement on a tiny bike with no gears. He said the ride was ‘Great as can be!’
Adriano Pallavicino, an adult participant, agreed. Commenting on Facebook, he said, ‘Thank you to all the people who organised it, amazing experience!’

Along with Ely Cycle Campaign (see box), we were also joined by some members of KLWNBUG (the Norfolk and Fens Cycling Campaign). Hunts Walking & Cycling Group is hoping to organise a group from St Ives next year. 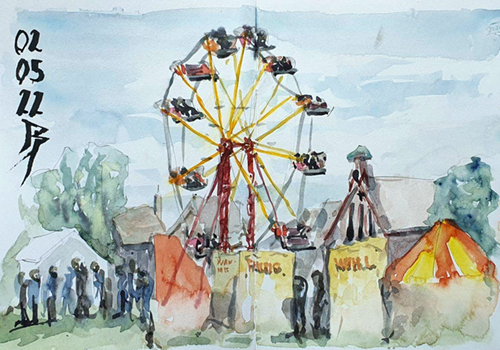 In keeping with its 821-year old tradition, the Reach Fair was opened by the Mayor of Cambridge, Russ McPherson, and pennies were thrown for children to collect. The fair was back to its pre-pandemic glory with stalls, rides, entertainment, Morris dancing and a traditional Maypole.

The Reach Ride wouldn’t be possible without the hard work of many Camcycle volunteers, plus sponsorship from Cambridge City Council and Continental Tyres – thanks everyone for your support! It’s never to early to start thinking about next year’s ride: this will take place on Bank Holiday Monday 1 May 2023. Get in touch if you’d like to join our team of volunteer organisers or are part of an organisation interested in sponsoring the ride.

A leisurely ride from Ely

More than twenty cyclists enjoyed the ride from Ely to the Reach Fair this year. There were cyclists from Cambridge and King’s Lynn as well as locals, and the youngest participant was just eight years of age.

We enjoyed a leisurely countryside ride along byways and car-free lanes. It was great to be able to have a quiet chat with folk from all over the place whilst enjoying the sights along the riverbank and through Wicken Fen. Quiet that is until we met with a mob of cyclists from Cambridge at Little Fen Drove! What a remarkable mass of cyclists including those on cargo bikes, tandems, triplets and even penny farthings.

We worked up an appetite with the 15-mile ride to Reach and then took in all the delicious and enjoyable offerings of the fair.

We were a reduced bunch on the way back because most elected to ride back to Cambridge, including the King’s Lynn contingent. Doing Ely-Reach-Cambridge (or reverse) then returning by train makes for a great day out.

The ideal cycling conditions on a very scenic route made the outbound and the return journeys a fabulous experience. Please can we have similar weather next year?