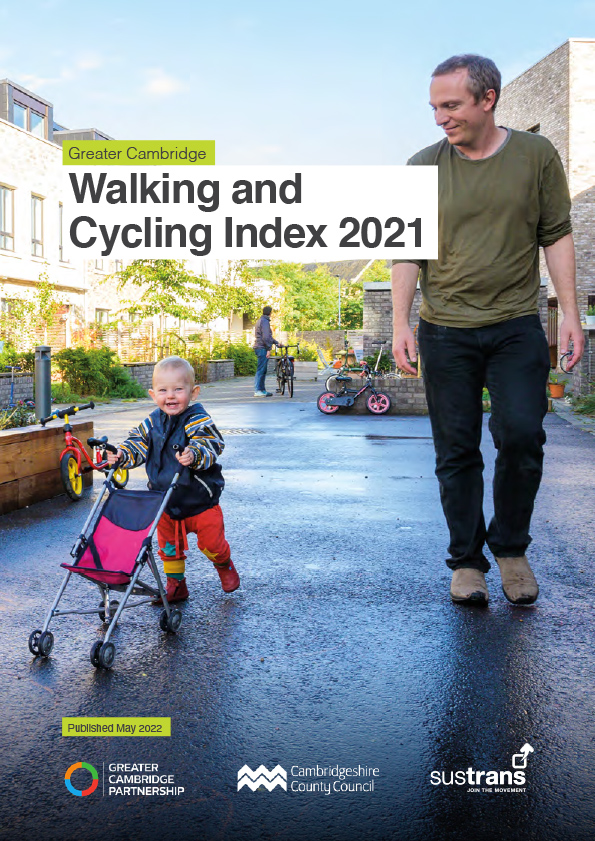 Active travel charity Sustrans added Greater Cambridge to its list of ‘Bike Life’ cities and city regions in 2019, as part of a project to collect high-quality evidence and support local leaders to make decisions that will benefit active travel. Last year, Bike Life was expanded to become ‘The Walking and Cycling Index’ and the results of the latest research were published in May.

The reports show that our area still leads the way in terms of walking and cycling participation – 67% of Greater Cambridge residents cycle compared with 37% based on aggregated data from all of the 17 regions surveyed, and 96% of residents walk (compared with 95% overall).

However, in Greater Cambridge, the proportion of those cycling regularly has dropped from pre-pandemic times. In 2021, 45% of residents said they cycled at least once a week and 19% said they cycled five or more days a week, compared with 48% and 29% in 2019. This may be a reflection of the continued levels of home-working last year, or just the survey size (a representative sample of 1,296 residents aged 16 or above).

Greater Cambridge residents feel safer choosing active travel than UK residents in general, reflected perhaps in the statistics that show a more balanced level of participation from women and those from ethnic minority groups in our area. 40% of women cycle, compared with 50% of men; and 45% of those from ethnic minorities ride compared with 46% of white people. However, there is more to do: despite 8 in 10 disabled people feeling comfortable walking, wheeling or spending time on the streets of their neighbourhood, they are still much less likely to cycle than people without a disability (29% compared with 49%), so it is vital that we continue to work for more inclusive cycling facilities and infrastructure. More work is also needed to help older people and those from lower socio-economic groups to access and participate in cycling.

Residents have a strong appetite for better walking and cycling: for example, 74% support the creation of more protected cycle lanes and 68% support the creation of more low-traffic neighbourhoods. 82% said that more traffic-free routes would help them cycle more and 79% said that more protected cycle tracks alongside roads would do so.