Save Our Cycles calls on everyone who loves their cycle to ‘lock it and log it’ to keep their property safe. We also work with the city council, police and other organisations on projects to improve the security of cycle parking and tackle theft. 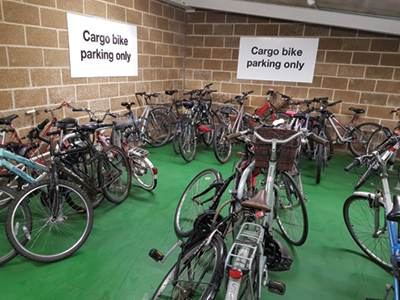 In January, the Department for Transport announced an extra £3 million to improve cycling infrastructure around train stations, with Cambridge’s Cycle Point on the list for investment.

A £530,000 grant has been allocated for accessibility and security improvements as part of a partnership project with Sustrans, Brookgate, Cambridge City Council and the Greater Cambridge Partnership. The train operator Greater Anglia will now start work on a programme of improvements developed in consultation with the Cambridge Cycle Point task group, of which Camcycle is a part. Security changes include an upgrade to the CCTV system which will allow remote viewing by the police, the installation of a speaker system to provide security announcements and warnings to would-be thieves and the opportunity to install access controls.

Camcycle has also advocated for better accessibility so that the Cycle Point can be reliably used by people of all ages and abilities and we hope to see Greater Anglia use this new investment to great effect. Plans include an increased number of accessible spaces on the ground floor for those with mobility needs or using larger and adapted cycles, and the addition of better signage throughout the facility.