From March this year, car advertisements in France will have to include a message promoting an alternative to private car use. The new requirement, confirmed at the end of last year in the government’s Official Journal, will involve using one message from a choice of three: ‘Consider carpooling’, ‘For day-to-day use, take public transportation’, or ‘For short trips, opt for walking or cycling’. The new rules apply to all forms of advertising media and will also require ads to feature the hashtag “#SeDeplacerMoinsPolluer” (Move and Pollute Less) and include details of the vehicle’s CO2 emission class. The move is a win for environmental activists who have lobbied on the issue for years, many groups demanding a complete ban on car advertisements.

Brussels City Council has approved plans for a new low-traffic zone within the central area of the city known as de Vijfhoek or the Pentagon. 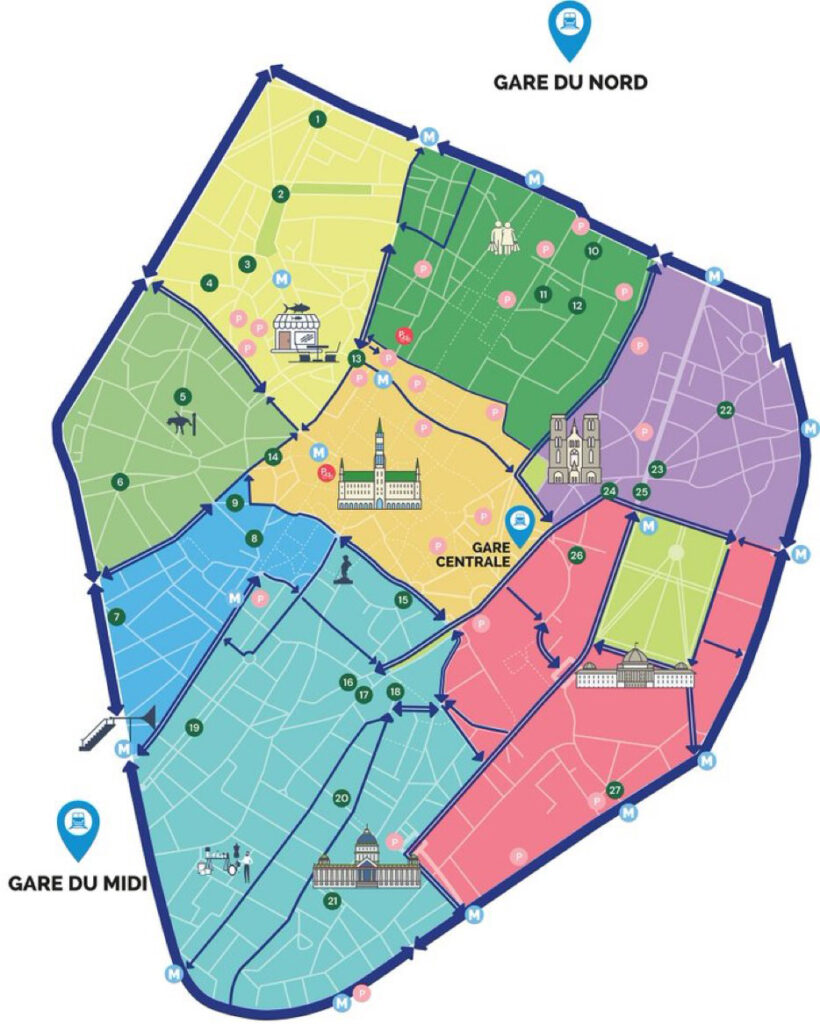 The new circulation plan is part of ‘Good Move’, the regional mobility plan for the whole Brussels-Capital region which was developed as part of a 4-year participatory process involving all local residents, businesses, authorities and other stakeholders. The scheme will use traffic loops, one-way streets and restricted access areas to make transit through the centre more difficult for motor vehicles. Currently, through-journeys represent a third of traffic within the city. The scheme will allow movements by pedestrians, cyclists and public transport users to be prioritised and space to be freed up for more greenery and public squares.

Neighbourhood meetings will be held in March to explain the plan to people in the new zones and initial evaluation will take place in September (a month after installation) so that the scheme can be improved where necessary.

Paris has also announced a plan to eliminate through-traffic from a central zone encompassing most of the 1st to the 4th arrondissements. The area will be largely reserved for pedestrians, cyclists, vehicles used by disabled people, car-sharing rides, taxis, emergency vehicles and public transport. The goal is to reduce traffic in the heart of Paris by at least half. ‘We want destination traffic,’ said David Belliard, deputy mayor of Paris in charge of the transformation of public space and mobility, ‘for people who have something to do there: shopping, going to the doctor, to the restaurant, etc.’

Closer to home, Oxford has announced plans to extend its Zero Emission Zone, install new traffic filters and introduce a Workplace Parking Levy across most of the city as part of its aim for increased use of sustainable transport and a 30% reduction in vehicular traffic by 2040.

A campaign in the US has highlighted an issue with the quality of bikes bought from supermarkets and other non-cycle specialists. Lower-income cyclists are vulnerable to being misled by bikes that appear to be good value but actually have a range of quality defects that make them unrepairable. Issues include cracked frames, bearing cups falling out of hubs, components with fragile threads, and the use of non-standard parts. Campaigners say that cycles like these ‘are harmful to the environment, erode public confidence in the usefulness and joy of bicycles, and waste the money of the mostly poor and working class people who buy them’.

The coalition of cycle shops, non-profits, co-operatives, cycle mechanics, and cycling advocates is calling via an online petition for a number of measures: a minimum durability standard of at least 500 riding hours; bikes designed to be serviceable, to hold adjustment and to include replaceable and upgradable components; and an end to the production of bikes that are ‘built to fail’.