A sentence in support of active travel, public and shared transport was added to the COP26 declaration on transport in response to campaigning from organisations around
the world.

Three hundred and fifty cycling groups signed a letter written by the European Cyclists’ Federation which called for world leaders to ‘commit to boosting cycling levels to reduce carbon emissions and reach global climate goals quickly and effectively’. Camcycle added our name, alongside local groups Ely Cycling Campaign and Milton Cycling Campaign, plus many others from across the UK.

The letter detailed what was needed from leaders to boost cycling, including focusing investments on cycling infrastructure, promoting cycling in all its forms, building links with public transport and providing direct incentives for people and businesses to switch from cars to bicycles for more of their daily trips. It ended: ‘ There is no conceivable way for governments to reduce CO₂ emissions quickly enough to avoid the worst of the climate crisis without significantly more cycling. Cycling is one of the best solutions we already have to ensure our planet is habitable for all generations to come.’ 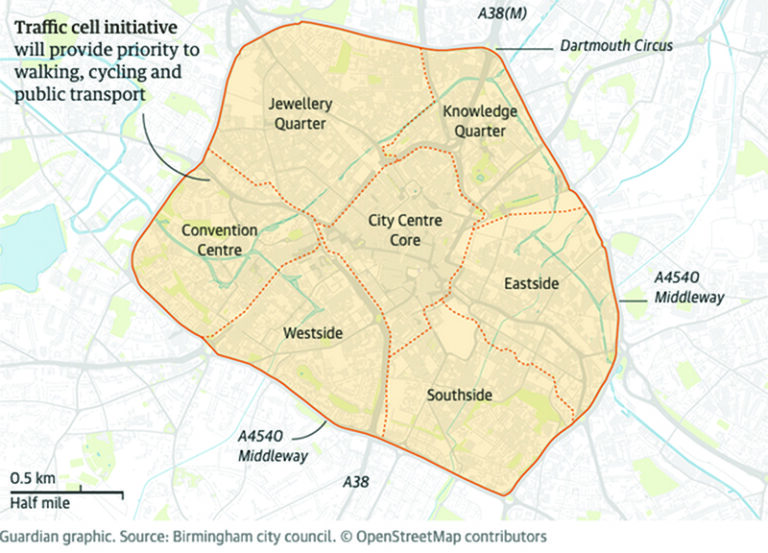 A quarter of Birmingham’s car journeys are one mile or shorter and to help people shift to cleaner and healthier forms of transport, the central area will be split into seven zones. Motorists will not be able to travel between the zones, but will instead be diverted via the A4540 ring road. It is similar to the ‘circulation plan’ template used in European cities such as Groningen and Ghent. The plan also includes proposals for a fleet of zero-emission cross-city buses and more protected cycleways. The city’s transport lead, Waseem Zaffar, only started cycling in 2018. His father, a taxi driver, died suddenly aged 54 and Zaffar says the plans will help reverse health inequalities as well as creating a more liveable city.

On 25 October, London expanded its Ultra Low Emission Zone (ULEZ). The new area covers a quarter of London and 3.8 million people. Mayor Sadiq Khan said the previous zone had helped cut toxic roadside nitrogen dioxide pollution by nearly half. A Bikesure survey revealed that it led to 63.5% of Londoners changing their mode of transport, with 17% switching to cycling. Under the ULEZ, most vehicles which don’t meet a specific set of emissions standards have to pay a daily charge of £12.50. It runs alongside the central London Congestion Charge Zone which costs £15 a day.

New trust to break down barriers to cycling

Tour de France winner and double Olympic champion Geraint Thomas has launched a charitable trust which aims to get more children cycling in England and Wales. According to the trust, barriers preventing young people from taking part in cycling include the affordability of bikes, repair skills, storage, safety knowledge and accessibility to opportunities to ride. It plans to provide a grant fund and work in partnership with other charities, clubs and schools to support young people in cycling.

is the number of new secure cycle parking spaces planned for Paris over the next five years. In October, the city revealed Plan Velo: Act 2, which aims to make Paris a ‘100% cycling city’ by 2026.

is the bursary offered by The Bikeability Trust to those who train as a new instructor. The Trust needs over 1,000 new instructors to support the government’s ambition to offer cycling training to every child by 2025 and is keen to encourage new recruits.