The bicycle was an invention that changed society and revolutionised the lives of many, including women. Rosie Humphrey reviews two books which look at the changes brought about by cycling.

The trouble with revolutions is that one never seems to be enough! I’m not talking politics here: the bicycle has been at the centre of several social revolutions in the last 150 years. The earliest hobby horses and draisines introduced the remarkable possibility of transport without horses and then the ‘ordinaries’ (penny-farthings to you and me, ridden almost exclusively by younger men) not only liberated groups of young men from the cities but were ridden across continents on epic journeys and developed a culture of spectacular races.

Revolution by William Manners charts the earlier years of this story. Our impression of Victorian society is typically a straitjacket of stratified prudishness. In part this was true, but amongst the upper classes men’s and women’s lives were largely separated and male society was frequently lax, louche and licentious. The early cycling clubs gave groups of younger men the opportunity to move away from their home environs to a freedom not always well used, although many of their ‘excesses’ would be seen as pretty harmless today! The democratisation of cycling made possible by the safety bicycle brought women and families onto the road and brought some sanity to cycling, but also another revolution. 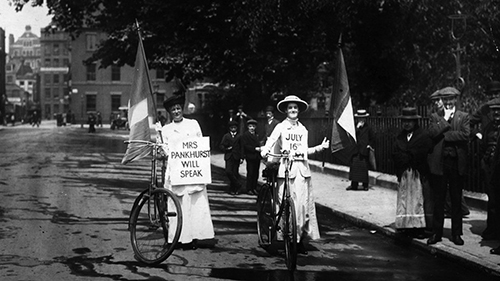 The Victorian woman’s place was in the home (unless she was working class) and a strict code of dress and manners was designed to keep her there. To be able to cycle women necessarily modified the restrictive fashions of the age so that they could breathe properly and move their legs more freely. The existing moves towards ‘rational dress’, less corsetry and fewer skirts, became focused on freedom to cycle and, although widely resisted, powered a revolution in women’s clothing as well as their place in society. Whilst the wealthy woman may have had bicycles painted to match her new outfits to parade around Hyde Park, freedom to travel gave women and men the opportunity to socialise, to protest and to organise. The suffragettes used bicycles to demonstrate – and for more clandestine activities! Trade unionists travelled by bicycle and romances between ordinary people in villages, hitherto inaccessible to each other, did away with the curse of rural inbreeding which had blighted many an isolated community for generations.

The 1950s was a golden age of cycling in Europe and all sorts of travel, sport and recreation based around the bicycle thrived in the space granted by increased leisure hours and a population still relatively fit after years of wartime rationing. Since then 70 years of the development and promotion of individual motorised transport has taken a toll on our health and environment, and the demographic of cycling has changed from the broad sweep of ordinary people to centre on young men, and often those with higher incomes. That this cheap and highly efficient means of transport finds most favour among those who least need its advantages is perplexing.

In spite of many victories in the battles of the past, women are still massively under-represented in every sphere of cycling, from utility cycling and recreational riding to racing. I read Revolutions by Hannah Ross this summer and found myself learning about an embryonic women’s cycling group in Afghanistan whilst the radio was informing me of the tidal wave of the Taliban’s takeover there. I wonder what has happened to them. Just as women’s cycling and the liberation that came with it were resisted here from the 1880s, women around the world are still fighting for liberation – and not just in Asia. There are good reasons why some women are not cycling in the UK too. Typically more risk-averse, facing not only aggressive traffic conditions but misogynistic abuse and a lack of role models and encouragement, many women don’t see cycling as an option. Hannah Ross sets out to tell the stories of women throughout the history of cycling. We meet women challenging the colour-bar introduced into American cycling clubs in the 1890s, women cycling across the Alps in the 1890s and even from Ireland to India in the 1960s. We are introduced to cycling groups of inner-city immigrant women in Europe and the battle for women to be recognised in the provision of competitive events.

The advent of the e-bike is a technological development on a par with the introduction of the ordinary and the safety bicycle. Whilst popular cycling was largely snuffed out by the development of the motor car, we can now see the disadvantages of its widespread adoption in the areas of pollution, health and climate, to name a few. We need another revolution. The bicycle has changed our society before. Maybe we’ll see another bicycle-based revolution around the e-bike?