While visiting Cambridge, Harry Lund and family tried an e-cargo bike from the Try Before You Buy scheme at Outspoken Cycles. 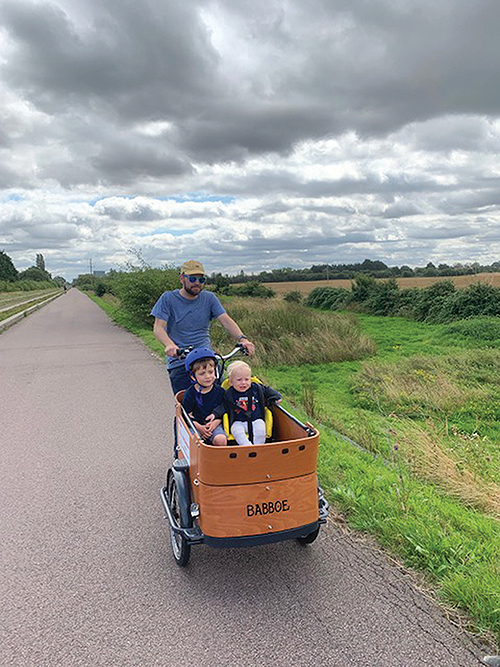 I’ve been hankering after a cargo bike for some time, and with two young children (aged one and three) my interest is increasingly practical. We’re a car-free family, and ideally would like to stay that way – but we’re feeling more and more constrained. Could a cargo bike make a viable substitute for a car?

A staycation in Cambridge seemed like an ideal opportunity to hire one to see how we would get along in practice. So I was delighted when my wife Helen came across the County Council’s Try Before You Buy scheme, run by Outspoken, through which you can borrow an e-cargo bike for a fortnight for just £25. The bikes on offer were the Babboe Curve Mountain (a three-wheeler) and the Babboe City Mountain (a two-wheeler).

We opted for the trike as it seemed less likely to overturn. The excellent staff at Outspoken gave me a full briefing on the bike, and I did a couple of laps of the car park to familiarise myself with it. I was expecting a steep learning curve moving from a two-wheeler non-electric to an e-cargo trike, but it came relatively naturally and I felt pretty comfortable by the time I’d cycled home.

Our first trip with the kids was along the Busway from Cambridge. We made it as far as Swavesey, at which point Otto (our three-year-old) was getting a bit restless. It was a very easy ride: flat, smooth and well-maintained surface, and no cars.

It was an overwhelmingly positive experience.
We had an enormously fun time and are totally sold on the benefits

Cycling around Cambridge itself was a different story. Cycling along the roads was generally fine, and car drivers were respectful and gave me plenty of room. But the quality of the roads was very patchy, and this was much more noticeable riding a heavy trike than either driving or riding a two-wheeler. Whereas with a bike you can easily avoid potholes, that’s simply not an option on a trike – whatever you do, at least one wheel is going to hit it.

Our experience with dedicated cycle paths was more mixed. Going up Milton Road means crossing numerous side roads where the traffic has priority, so to be safe I had to ride much more slowly than I would have liked. And the buttons for Toucan crossing were placed awkwardly, so I sometimes had to dismount to press them. But the shared-use paths and bridges along the river were great for getting into town (even if it felt a little hairy at times getting through the relatively narrow cattle grid gates around Midsummer Common).

Parking the bike was also sometimes challenging. Aside from one set of dedicated cargo spaces, we were limited to using the end spaces of bike racks, or finding a lamp post where the bike wouldn’t be too much in the way. But this was rarely a huge inconvenience, and at worst meant we had to park a bit further away than we otherwise would.

Later in the fortnight we made it all the way down the Busway path to St Ives. I stupidly didn’t set off with a fully charged battery, and it ran out of steam with about 5km to go. This was a harder slog than I’d expected, and an excellent demonstration of just how much assistance I’d been getting from the motor. Not a mistake I’d make twice!

Overall this was an overwhelmingly positive experience. We did far more in those two weeks than we could possibly have done without the Babboe, and we all – especially the kids – had an enormously fun time. So we are totally sold on the benefits. The main thing holding us back will be familiar to many people who live in terraced houses with no access to the garden – finding somewhere secure to keep it.

Inspired to try a cargo cycle?

Outspoken Cycles’ e-cargo bike Try Before You Buy Scheme is provided through the Energy Saving Trust’s eCargo Bike Grant Fund in collaboration with Cambridgeshire County Council and the Greater Cambridge Partnership. They have a range of e-cargo bikes for both families and businesses, and the scheme is an exciting opportunity to trial a cargo bicycle or tricycle to see how it can work for you over a longer period, before committing to buy.