This year global scientists delivered the clearest, starkest warning yet. ‘Unless there are immediate, rapid, and large-scale reductions in greenhouse gas emissions, limiting warming to 1.5° will be beyond reach.’ It is ‘unequivocal’ that the climate crisis has been caused by human activities and is already affecting every part of the planet.

Perhaps the hardest truth to swallow is that ‘many changes due to past and future greenhouse gas emissions are irreversible for centuries to millennia’. We and subsequent generations will have to adapt to a world that is unlike any we have known. Soberingly, over half of those emissions have been added to the atmosphere in the last 30 years. However, this timescale brings hope too, from the knowledge that we could create a future including many strengths from past decades that were at risk of becoming lost. It’s time to grow community cohesion; raise confident, independent children; and ditch political and commercial short-termism for the kind of ‘cathedral thinking’ that should be at the heart of true sustainability. 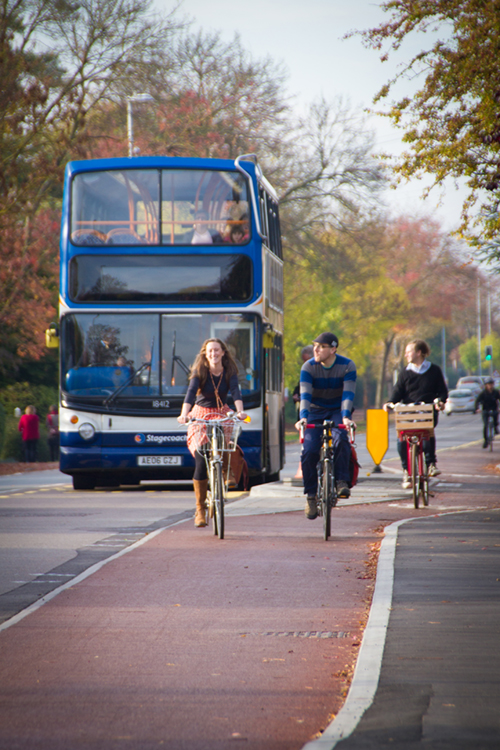 What does this mean in terms of transport? Globally, it accounts for around a fifth of carbon emissions and three-quarters of this comes from road vehicles. In the UK, more emissions come from transport than any other sector (34% in 2019) and in Cambridgeshire it’s a huge 44%. We need to act – and fast.

In July, Cambridgeshire and Peterborough Mayor Nik Johnson was accused of ‘tinkering around with buses’ as he suspended the CAM metro project. A critic of Smarter Cambridge Transport’s ideas on Twitter called cycling and walking ‘niche’. However, the advantage of these modes of sustainable transport is that they don’t necessarily need new infrastructure to rapidly deliver benefits to all types of communities. Increase existing services, reduce prices and free up space on the roads through bus gates and similar measures, and public transport could quickly become more attractive and convenient for many thousands more journeys in both rural and urban areas. Use simple planters as ‘modal filters’ in residential roads and traffic wands or cones to transform traffic lanes into ‘pop-up cycleways’ and immediately safe new routes for walking and cycling would be opened up. Shifting the balance from ease of driving to ease of sustainable transport could be done quickly via measures including reduced parking and better integration between active and public transport. Add support for behaviour change such as free cycle training and innovative shared transport schemes and suddenly everything looks different.

In a matter of days last year, road traffic in the UK dropped to levels not seen since the middle of the twentieth century, while cycling levels rose by up to 300%. Of those interviewed for the government’s National Travel Attitudes Study, conducted between May and July 2020, 38% said they cycled more than before the Covid-19 pandemic, and 39% had walked more. However, even small reductions in traffic make a significant difference. When planning the walking and cycling trail which bears his name, Camcycle campaigner Jim Chisholm calculated that if just one in twenty people switched from driving to cycling, delays on the roads would be halved, which would in turn make bus journeys more reliable. Evidence shows that reducing roadspace for motor traffic reduces the number of car journeys, whereas building more roads always has the opposite effect.

Trips of under 10 miles account for 80% of all UK journeys: two thirds are under 5 miles and a quarter are a mile or less. We are already living more local lives than we realise; add in better buses, incentives (and secure parking) for e-bikes and planning decisions which prioritise ’15-minute communities’ and the task of achieving ‘immediate, rapid, and large-scale reductions’ in emissions already looks less daunting. Yes, the future will also include electric cars, e-scooters, mobility hubs, hydrogen fuel, video-conferencing and other types of technology that can help us transition from our high reliance on fossil-fuelled transport, but it will also be more than recognisable to someone who grew up in the 1970s, when global carbon emissions were less than half of what they are today. 87% of parents who grew up in that era feel today’s children are missing out on the freedom they had, so let’s reclaim the gift of independent active travel for the next generation along with a liveable planet for their children and grandchildren to enjoy.

Anna Williams is the Communications and Community Officer for Camcycle. This article was originally published on 25 August, 2021, in the Cambridge Independent, which features a monthly column by a member of the Camcycle team.