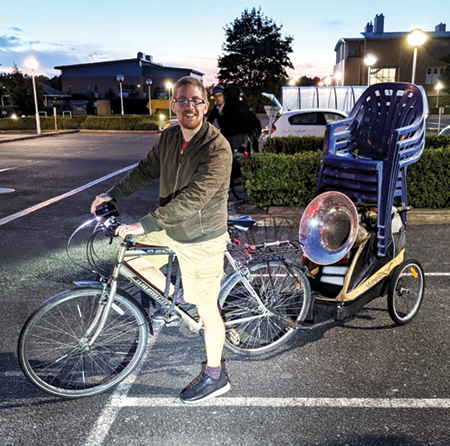 I’ve lived in Cambridge for 13 years, since arriving here as a student, and for that whole time have preferred active travel – walking or cycling – for local journeys in and around the city, probably because I’m not a very confident driver! I do keep a car for longer journeys and to visit family, but when I started to cycle to work regularly there was only one local journey I still used the car for – getting to rehearsals for my band, CSD Brass (as a student I cycled a few hundred metres down Grange Road with the tuba in its soft case worn as a backpack, but that was neither a safe nor a responsible way of transporting the instrument!).

A few years ago, I hit on the idea of using a child trailer to carry the tuba. Although obviously not designed for the job, the instrument fits snugly into the trailer with enough room for music folders and the music stand. I get some second looks when I cycle through Arbury, but it feels good not to have to drive. This summer, the band has been rehearsing outdoors in the car park of the Royal Society of Chemistry’s Cambridge building, Thomas Graham House. Since it’s close to my home and the route there only involves cycling on roads within the Science Park, I have been bringing my garden chairs to rehearsal, balanced precariously atop the tuba. It’s made rehearsing more comfortable, but I won’t miss doing it when we go back to rehearsing at an indoor venue with its own chairs again!