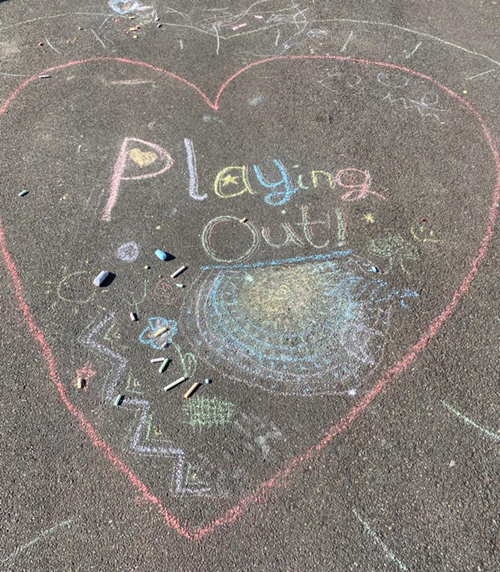 Do you have a memory of being able to step outside your door and play? Kicking a ball around, skipping, roller-skating or making-believe the tree at the end of the street is the portal to another land? Children have been playing out for generations, but this freedom has dwindled and now many children have fewer chances to play on their doorstep. Yet their need to play outside with friends close to home remains just as strong, and in the absence of opportunity to do so, their families and communities miss out on something important!

In 2010, parents in Bristol developed a model that enabled neighbours to close their street to through traffic for a couple of hours, creating a safe space for children to play outside. The organisation Playing Out was set up to support communities in running Play Streets, and now there are over 660 Play Streets running nationally. That’s thousands of children getting the benefits of being outside, learning new skills, connecting with their communities and making safer, happier places to live.

So what about Cambridgeshire? The idea has been slow to take root here, with just a handful having taken place. But this year has been declared the Summer Of Play, and Play Streets are now up and running in Arbury, Sawston and Queen Edith’s. We hope this is just the start of something that will become much bigger!

Local residents, Cambridgeshire County Council, and Cambridge City Council have been working together to promote Play Streets and support communities who want to run them.

Cllr Tom Sanderson, Chair of Communities, Social Mobility and Inclusion at Cambridgeshire County Council, explains why they are supporting Play Streets: ‘We are committed to helping our communities to do the things that are important to them. We are working with our communities and partners to focus on their needs and support them in living happier, healthier, independent lives. Our local Playing Out scheme is an excellent example of the council, the Highways team and other partners working together to make it easier for residents to do more, enjoy their community and bring people, families and children together.’

Back in February 2021, a few of us in local environmental group Greener Sawston were worried about our children; homeschooling was hard on most of them, and they hardly complained. We wanted do something nice, to thank them for keeping us adults safe. Enter Playing Out! There was a Zoom meeting, then emails, messages and form-filling. We applied for monthly Sunday sessions, 2pm to 4pm.
At our first session in June the children stood around at first, waiting to be told what to do. After over a year in confinement, it’s probably not surprising that they’d forgotten how to play. Eventually they warmed up and by the end of the session everyone was having a super time despite the weather being a bit rubbish. Most residents were either ambivalent or supportive but there was one who was angry. A couple of visitors in cars rolled their eyes when I explained they’d be escorted to their destination, in order to keep children safe, but they followed quietly anyway. It was quiet, but those who came enjoyed themselves. 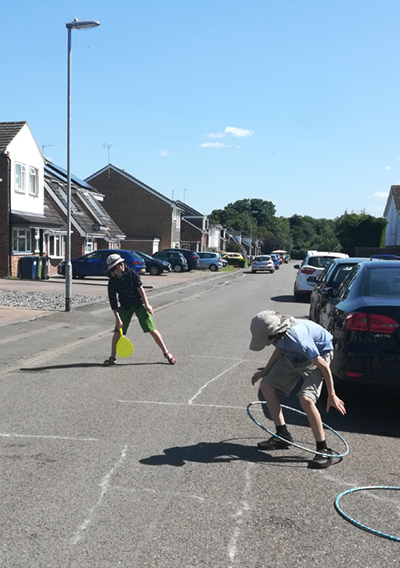 Our second session in July went really, really well. Our county council contact arranged a friendly local police officer to visit our angry resident, who, mysteriously, had decided to go out for the day. Everything went swimmingly! It was a really hot day. I’d saved up squirty ketchup bottles, so we had buckets of water out and the children had water fights all afternoon. The police officer brought a police car, and took great delight in letting children and adults press the ne-nar ne-nar button – I’m not sure who was more excited! Some adults took their camp chairs into the shade, and sat around chatting – as did the older children. We borrowed a big skipping rope, and managed to remember rhymes. There was a bit of skateboarding going on, and several children learning to ride bikes – I drew chalk trails on the road for them to follow. Freeze pops kept everyone cool.

We’re starting to see community links building – old neighbours are meeting new neighbours, children who go to different schools are meeting each other. Residents have told us how lovely it was hearing the children play, and seeing the chalk patterns afterwards. Running Playing Out in two different streets has been particularly great – it’s felt easier having instant supporters.

I am very worried about adults being horrible about Playing Out. But one of my children keeps reminding me: ‘You’re doing a fun thing, Mum. The kids love it. And love is strong.’

We’re more than happy to share our risk assessment and traffic management plans – feel free to email me for more information.