One of my lockdown rides takes me round the south of Cambridge through a loop of villages along a road I know very well. Twenty years ago I drove it six days a week delivering fresh bread. Two things have changed since then: the shops to which I delivered have mostly closed and there are lots more houses. Estate agents say that the latter is part of a Covid-enhanced trend: many more people are leaving cities in search of space to breathe and move around. These ribbon developments share many characteristics with American urban sprawl which Charles Montgomery describes in his book Happy City.

If we are to cut global carbon emissions we need to take a good look at city living because of the automatic reduction in carbon footprint of the city dweller who doesn’t have to travel so far and whose home is more efficiently connected to all the services we rely on today. Charles Montgomery shows that high population density communities needn’t be a bad experience if we design them carefully. Using primarily American examples, he contrasts the sprawling suburbs surrounding cities with some of the inner-city neighbourhoods that are getting it right.

If we are to cut global carbon emissions, we need to take a good look at city living because of the automatic reduction in carbon footprint of the city dweller who doesn’t have to travel so far

Sprawl is not only an environmental disaster in terms of land use but it is very expensive to deliver services and involves people travelling huge distances to get past all the detached houses on their own plots that people fulfilling their suburban dreams mortgage their lives to buy. And distance is the thing – shops are typically several miles away, surrounded by acres of parking, and there is often no sense of community because many in the bigger cities may add well over an hour of commuting to a long working day leaving very little time or energy for friends and neighbours. He talks about the ‘wallet test’, asking the question: “If you dropped your wallet, would you expect to get it back?” In neighbourhoods where people know each other most would say ‘yes’. In the sprawl districts so few people know each other that the majority say ‘no’ – a reflection on the typical lack of trust leaning over into fear and suspicion where people live for years among strangers.

Montgomery contrasts the sprawl with older neighbourhoods built to be serviced by the streetcar (tram) networks. Smaller homes and gardens with shops and community facilities within a five-minute walk. The streetcars are now replaced by buses and the easing of the sprawl’s stricter building control laws allow a variety of housing types to cater for a mixture of people that make a real community.

Improvements can be made outside richer neighbourhoods: Enrique Peñalosa, Mayor of Bogotá, has introduced a state of the art high-speed bus network protected from other traffic that has improved reliability and slashed journey times for the non-car user. He has improved the feeder roads in the slum suburbs by building high- quality footways and cycle paths in the middle of the road and leaving the motor traffic with the ruts and potholes.

Vancouver, with tower blocks orientated to the mountain views, places conditions on developers to provide inviting communal spaces and a human-scale streetscape with smaller store-fronts and wider pavements. Montgomery makes the point that we know how to develop towns and cities if we look around and see what is working elsewhere. He visits Houten in the Netherlands which is accessible by motor vehicles but it’s so much easier to walk or cycle so that’s what everyone does. We hear about Vauban, a development in the town of Freiburg in Germany where motor vehicles may be brought briefly to homes but not parked there, and every home comes with the opportunity to buy parking in a multi-storey at the edge of the development. And we go to Jeanette Sadik-Khan’s pedestrianised Times Square where an elderly mother, clinging to her son for safety on the surrounding crowded pavements, relaxes as they arrive in the square and steps out on her own with room not to be jostled. And what’s the thing that we all love to sit and do in public space? People watching! So set the seating to watch the action, not the traffic!

There are lots of ideas with application closer to home, for instance redesigning the limited space in streets to favour those who use space most efficiently (which gives pedestrians first, then cyclists, bus-users and cars last). There’s keeping vehicle speeds down so that not only are people safer but they feel safer and so use the new freedoms of the street. There’s the design of open spaces – manicured parks don’t give the amenity value of rougher open land, which highlights the value of our grazed commons, reaching so close to the city centre.

A few years ago one of my fellow market traders told me in a lull between customers that she and her husband were retiring (he was an accountant and they could have moved almost anywhere) to a flat in central London. It was in the Barbican and I’m sure it was very nice. My experience of a tower-block less than a mile away was a little different – all the food had to be in the fridge or on the kitchen table which stood in four tins of paraffin and had a shiny plastic sheet over it so that cockroaches which fell through the light fitting slid to the floor. It is possible to be happy living in a city but it certainly isn’t everyone’s experience!

Montgomery’s point is that we know how to design towns and cities that work for people and the environment. The research has been done and he references the studies alongside the examples that he quotes. We need to take a careful look at the way we do cities. We know how to build homes
that people enjoy living in, but the build quality of so many new homes today is scandalous. We know how to make developments which will become communities but we increase units per acre to the point where people cannot help but feel overcrowded and resentful of their neighbours. We know how to link our city centres and suburbs with public transport – and cycle-routes – but we leave them until later and instead establish patterns of car dependency which are hard to break. And then we wonder why people want to escape to the country. We need happy cities!

We All Ride Bikes Now 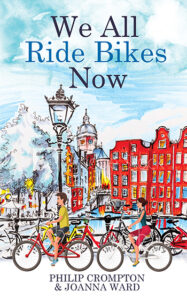 Can you remember the first time you decided to start cycling? When did you consciously decide to use your bike as the best means of transport for getting from A to B?

We All Ride Bikes Now is the story of a year in the life of Anna, an 18-year-old beginning her journey as an adult. It is about the decisions which she makes and how those decisions changed her outlook. Each chapter starts with an inspirational quote and then cleverly weaves light-hearted prose with facts about day-to-day encounters in the first months of work and independent living.

People are key to the book with Anna being influenced, in the initial pages, by her schoolfriends’ opinions about sweaty uphill rides. However, as Anna starts work, she meets people with different mindsets – there’s Ingrid the store manager, Carlo the Dutchman, a fellow teenager at a supermarket and a friend’s Grandad. Each person represents a different facet of the community and soon Anna is cycling her bike ‘Frankie’ pretty much everywhere.

We have the pandemic to thank for this work, as co-author Joanna Ward explains: ‘In the midst of lockdown one last spring, Phil Crompton, chair of Nottingham Ridewise, and I sat down for a Zoom call to discuss just why it was that still more men than women were riding bikes. Many discussions later the result was our book We All Ride Bikes Now which, although a work of fiction, explores all the barriers stopping girls and young women from getting on their bikes. We tried to make the characters inspiring and relatable so that our readers could see themselves and find signposting to the solutions, not just a load more problems.

‘I believe passionately that the way to get more girls and young women riding bikes is to provide them with relatable role models like Anna – not perfect but (eventually) willing to explore the options and formulate workable solutions.’

We All Ride Bikes Now is self-published by the authors. For copies, email Joanna at weallridebikesnow@gmail.com. The £10 price includes P&P to UK addresses and all profits go to RideWise, a Nottinghamshire based charity which provides education, training and support to enable communities and businesses to move to greener forms of transport.