Relief of lockdown boredom, a sense of pedantic satisfaction, a way to explore new places or a mixture of all three? Two local cyclists each picked 2021 as the year for riding every road in Cambridge. 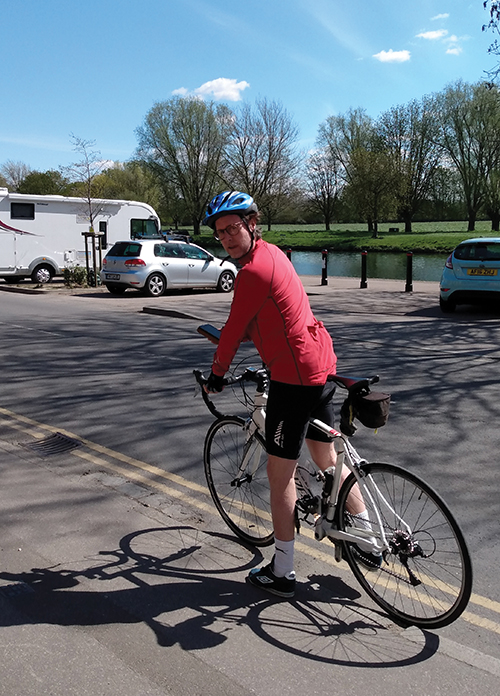 For some years I had idly wondered what it would take to ride every street in Cambridge. Feeling I didn’t have enough time or inclination for something so inane, I put the idea aside.

Then, as lockdown boredom deepened and the freezing Fen winds and flooded Busway dissuaded me from my usual training rides, I pondered whether perhaps a slower, less wind-chilled cycle round city streets might not be such a bad idea. My better-half helpfully pointed out that, in these strange times, madness has had to be recalibrated: previously crazy-looking pastimes are rapidly becoming socially-acceptable norms.

So on 31 January, lycra-clad on my fancy racer, I set out amid thin snowflakes to see how many of my local East Chesterton streets I could traverse before hypothermia or lack of energy got the better of me, safe in the knowledge that, if anything did go wrong, I wasn’t far from home. 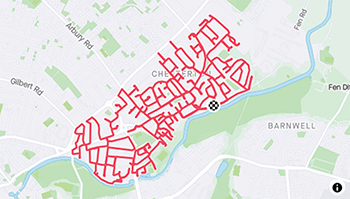 I use Strava to measure my sports cycling and it provided the perfect way to record every inch I covered. I know my neighbourhood pretty well and I have a good sense of direction, but even so I found myself stopping regularly to consult the Strava live trace and OS Maps app to check I’d covered each road behind me and to plan the way ahead. I found that in 2 hours and over 22 miles I had graffiti-ed the triangle of town between Milton Road and the river, plus I had discovered a load of roads within half a mile of my house that I never even knew existed. Back in the warm I was able to review my Strava trace and confirm I hadn’t missed any odd bits. I downloaded my map and shared it with a few friends, one of whom rudely remarked that it looked like cellulite on a big fat bottom.

Now I had a yardstick to estimate what would be required for my original challenge. I rode King’s Hedges followed by Arbury. I became infected with a kind of mania, always daydreaming paths through the next section, and itching for lulls in work and home-schooling for opportunities to shade in more of my map of Cambridge.

As I neared completion my daughter’s school appealed for entries from parents for a lockdown art competition. At my partner’s suggestion I submitted my Strava trace. I see a quirky beauty in it.

Occasionally I became so disorientated I ended up cycling some streets as many as four times. Sometimes I discovered I’d missed a street, requiring a detour of several miles on the next ride. Twice my phone died forcing me to halt the ride. At various shiny new developments, it felt like streets were being laid down as fast as I could cycle them. But 26 days later, after 13 rides, 271 miles and over 24 hours in the saddle, I completed my challenge. Okay, so my Cambridge doesn’t include business parks, Addenbrooke’s, Trumpington or Cherry Hinton: I can always come back to them another day.

Was it worth the effort? Yes. Despite living and cycling in Cambridge for most of 30 years, I discovered some amazingly beautiful spots, such as pausing at the top of Conduit Head Road to admire a pair of buzzards circling overhead. For weeks I enjoyed a warm glow of pedantic satisfaction. I’ve given my brain a frazzling topographical workout. And despite never being out of breath, on my next sports ride I felt noticeably fitter.

I must finish with a heartfelt thank you to Zoe for encouraging and enduring my frequent absences during these testing times.

I always knew anywhere in Cambridge was within cycling distance, but discovered a number of good quiet backstreet cut-throughs that make this even more true”

I’ve set myself a ‘different’ challenge this year … to cycle every road in Cambridge! I’ve loosely defined the area as bounded by the M11 to the west, the A14 to the north, Shelford to the south, and Airport Way/Cherry Hinton High Street to the east. With the notable exception of Barnwell, I’m around halfway there at the moment; I’ve covered almost everywhere south of the river, or south of the A1303.

I’ve found several new parks I didn’t know of, and been pleasantly surprised by the number of houses with multiple bikes locked up outside! It’s been interesting to see more of how the city has developed, and to discover more cycle-friendly backstreets and cut-throughs. I’ve lived in the Cambridge area for nearly 13 years and there’s certainly been a lot of building in that time, including several whole new estates in the Trumpington area.

I think my findings can be grouped into:

I’ve also realised that many of the county council maps are quite dated now and/or missing some useful cut-throughs.

My top shortcuts or wormholes in Cambridge include:

There are also quite a few bridleways and ‘permissive’ cross-country routes which are good for leisure cycling between the South Cambridgeshire villages, but not shown on many maps.