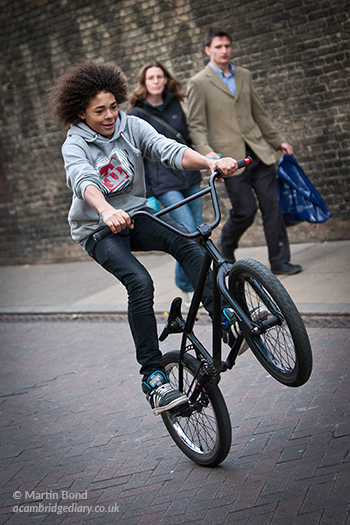 To the best of my ability I ignore the beauty of the college buildings and try to focus on the town people leading their ordinary lives.

Martin Bond is embarrassed to admit to Camcycle that he doesn’t really cycle at the moment. ‘I’ve got five bicycles and I never use them! I used to commute to London with a Brompton, so I’d fold it up and put it on the train and get out the other end and cycle from King’s Cross to Fleet Street. I’ve got a butcher’s bike which is all painted up with “A Cambridge Diary” which I used to use to get my lighting and photographic gear to commercial jobs because it was a lot easier to get parked – just pull up your bike outside the office or college you were working at and that was it. I’ve got a 1945 Raleigh which is beautifully restored and I’ve got a VSF Fahrrad which is German, like a Rolls Royce, as well’. The reason all the bikes have been gathering dust is partly owing to the effect the pandemic has had on events and commercial work, but also because even cycling is too fast for the kind of detailed observational photography he’s famed for. 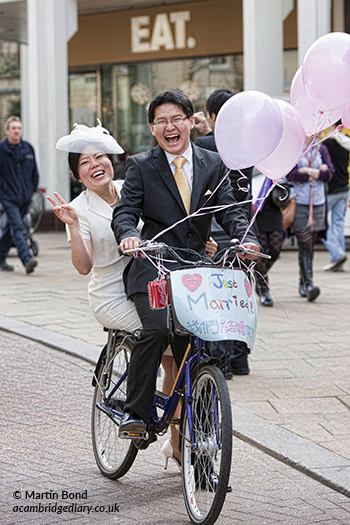 What started as a year-long project documenting everyday life in Cambridge to counteract the clichéd vision of hallowed cloisters and King’s College Chapel has now become a daily ritual. Eleven years later, with over 60,000 followers on social media, Martin admits that he’s addicted to adding to the visual record of ‘A Cambridge Diary’ and the quality of the picture he captures determines his mood for the day. He walks miles each week (‘10,000 paces a day? I smash that every day. Easily.’) searching for a memorable image of the city, its people or its rural surroundings.

Walking ensures he doesn’t miss those unique moments – a couple celebrating their wedding on two wheels maybe, or a boy pulling a wheelie amid the city centre shoppers. His online community often fills in the gaps of the story, each picture going off to have a life of its own: sparking memories, starting conversations and helping those no longer in Cambridge feel connected to the city they love.

Although he usually views the city on foot, Martin’s long history with Cambridge is tied up with the bicycle and he believes cycling will play an important part in the city’s future. ‘I can remember a time when a bicycle was really quite a major purchase and you looked after it. I remember my dad cleaning his bike at the weekend and certainly my grandfather. We’ve been lucky in Cambridge because very few students had cars and so the university is partly responsible for our reputation as being a cycle city. And it’s the future. There’s a lot of controversy about the way the town is being shut down in terms of access by motor vehicles, but I think it’s inevitable and I think it’s a good thing. Even though it’s inconvenient we’ve got to question why it’s inconvenient – it’s inconvenient presumably because you’ve got a car. Obviously we need to get things in and out of the town, but I’m sure that other countries can show how it can be done.’ 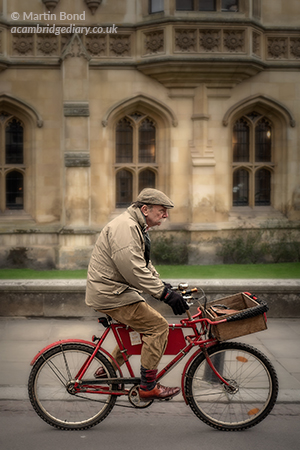 Work with the movement of the bike

When you’re trying to bring stillness to a thing that’s moving quite fast, you have to do a certain amount of what’s called panning. Move the camera in time with the movement of the bike – it gives a lovely effect of blurring anything in the background but is quite difficult to get exactly right. You have to use a reasonably fast shutter speed, but not so fast as to kill the process – if it’s too fast, then everything becomes pronounced.

Photography is all about where you stand. So get low, go right down to street level and try shooting from there or get a bit higher than the human eye. 90% of photos are taken from around 5ft 5 high, but just because our eyes happen to be placed at that elevation doesn’t mean that’s the main way we should view the world.