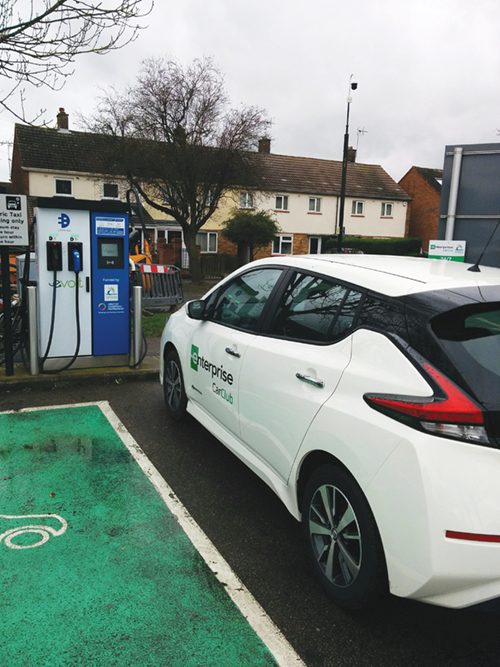 Transport, how it’s provided and how we all use it is becoming a hot topic for politicians, transport providers, pressure groups and of course for the travelling public, which is pretty much all of us. Individuals may feel that some of the changes they would like to see are not happening fast enough, but it is certainly becoming an issue of increasing importance.

One development which is being adopted in some European cities is the creation of mobility hubs, which combine access to multiple forms of travel at a single location. The mix of options may include on-street car club vehicles parked close to railway stations or bus stops, cycle-share schemes and real-time public transport information.

Cambridge already offers a mix of transport options, not least cycling. However, bringing different methods of low-carbon transport together is an important development to prioritise. In 2019, the Cleanwheels advocacy group was established by members of Transition Cambridge with the aim of promoting the development of clean car clubs in the city as a key element of sustainable mobility. ‘Clean’ in this context means plug-in electric vehicles that create no tailpipe emissions on local journeys. Pure electric cars have no tailpipe at all and can be run on electricity from renewable sources. Hybrid cars use fossil fuels for longer journeys but can still be clean and silent around town. Car clubs are able to offer their members the benefits of these advanced technologies without the costs and hassle of car ownership. They can also reduce private car parking to free up space in the streetscape for other activities including cycling, walking, socialising and play.

Cleanwheels provides input to the Steering Group established by the city and county council to manage a contract awarded to car rental company Enterprise in September 2019. The Enterprise Car Club in Cambridge has more than 30 cars plus vans to meet those occasions when people need short-term access to a vehicle. All the cars are low emission, hybrid or electric and many are located close to public transport hubs so that people can more easily combine transport modes into sustainable and cost-effective journeys.

Someone moving to a new house may want the use of a small van for a few hours. A family may want to visit a rural historic site, stately home or museum which is not easily accessible by public transport. Use of the car club vehicle could be the final leg of a journey initially made by bus, train or cycle. Car clubs are increasingly becoming part of a new and more flexible approach to mobility that will enable people to switch seamlessly between forms of transport as and when required.

The car club supports Cambridge City Council’s Air Quality Action Plan which aims to reduce the number of vehicles on the city’s roads, and help air pollution levels continue to fall, by encouraging people to use low emission, hybrid and electric vehicles. Enterprise will continue to work with Cambridge City Council to make low-emission vehicles available in the city and has an ambition to eventually convert all its vehicles in Cambridge to EVs.

Removing the barriers to a healthy transport diet

In the Spring 2019 magazine, I wrote about ways decision-makers could help people transform their ‘transport diet’ and choose the healthy options for the majority of their journeys within urban areas: active travel choices such as walking and cycling, followed by less-polluting choices like public transport. I pointed out that it needed to be easy to make these decisions and that new communities needed high-quality cycle links and bus services ready and waiting before residents moved in.

Eighteen months later, I was invited to talk about my experience of low-carbon transport at the Cambridge Zero Climate Change Festival. There are many factors behind my family’s choice to live without a car – financial, environmental and social justice reasons all feature – but, in preparing the talk, I realised just how much the neighbourhood I live in makes this possible. East Chesterton (like the CB4 communities mentioned in Margaret’s article on sustainable communities) makes a good ’15-minute neighbourhood’ and it is relatively easy to access the majority of our regular destinations on foot or by cycle (see chart). Bikes are often used for trips to villages on the edge of the city, and for further-afield day trips we choose bus, train or local car club. Long journeys are generally taken by train (with walk/bus/taxi connections) or hire car, if the destination is rural or involves camping or multiple stops. We’re grateful to be able to choose from a transport mix like this and it inspires me to help shape places where more people feel able to do so.