Having had the opportunity of speaking at the December Camcycle meeting about my experience of community organising within Queen Edith’s, it’s a pleasure to be able to continue the discussion here, writing in a personal capacity rather than on behalf of the Queen Edith’s Community Forum (QECF).

As I described at the December meeting, Queen Edith’s is on the doorstep of the Biomedical Campus and it often feels like the integrity of our neighbourhood plays second (or third or fourth) fiddle to decisions made with the Campus’s priorities in mind. That’s not to say there aren’t shared interests:

But by the late 2020s it’s predicted that 30,000 staff will be working there, plus thousands of patient and visitor trips a day, so the scale of the enterprise is huge.

It’s also important to note that Queen Edith’s doesn’t just host the Biomedical Campus but also several large secondary schools and sixth-form colleges which collectively educate nearly 60% of the county’s A-level students. Like the Campus, these generate significant inward flows of people from right across a wide catchment area.

Given the overwhelming presence of these large institutions, it seems both desirable and equitable to consider the needs of Queen Edith’s in its own right. Yet no-one in any of our local government bodies seems to have any interest in exploring this. Hence in early 2020, QECF used the PlaceStandard survey tool to explore how people felt about the area. Of course, residents have had the opportunity to participate in consultations relating to the multiple disconnected interventions proposed for our area over the last decade. However, PlaceStandard covers much more than just transport and planning. It allows a community to look at its assets and challenges as a whole – and the best bit is it’s free and readily accessible! You can see the results we generated here.

QECF were planning to take this work further but then the pandemic struck and priorities changed. However, everything that has happened in Queen Edith’s since has increased my belief that ‘the neighbourhood is the unit of social change’ and that a renewed focus on the local – our neighbours, our green spaces, our businesses – can be a powerful force for good. The volunteer scheme, the food hub, the children’s sports sessions, the litter picking, the toy and book exchange, and so much more, have all been achieved because we have been able to see local needs, mobilise local assets and develop local solutions to build local resilience.

How can we then use this learning in a post-Covid future, driven by a desire to ‘build back better’? I have three preliminary thoughts:

Think about ‘roots’ as well as routes

At the moment, decision-makers consistently prioritise the needs of the people moving through an area and disregard those of people moving within an area. For example, the modal filters which have been deployed by the county council on Nightingale Avenue and Luard Road to create safe cycling and walking routes are aimed at getting staff to the Campus. That’s a worthy objective. However, at the same time, two planning applications are being considered for the new GB1/2 housing developments on Wort’s Causeway that allow no safe or convenient active travel access by 900 future residents to local schools or shops. Despite active lobbying by Camcycle and QECF, neither the planning authority (city council) nor the highways authority (county council) seems to regard this as enough of a problem to require the developers to find an alternative solution.

Respondents to the PlaceStandard survey made it very clear that they regarded the local centre in the south of the Queen Edith’s area on Wulfstan Way as a missed opportunity to create a heart for the neighbourhood. With all the growth likely in urban fringe sites around the city, it’s important that we create places where people will enjoy spending time locally and where they can meet many of their needs without having to travel into the city centre. This both builds local community and takes the pressure off the most over-crowded locations. Minimising traffic in our neighbourhoods is necessary but not in itself sufficient. We need planning, community development and business interests all to play their part. 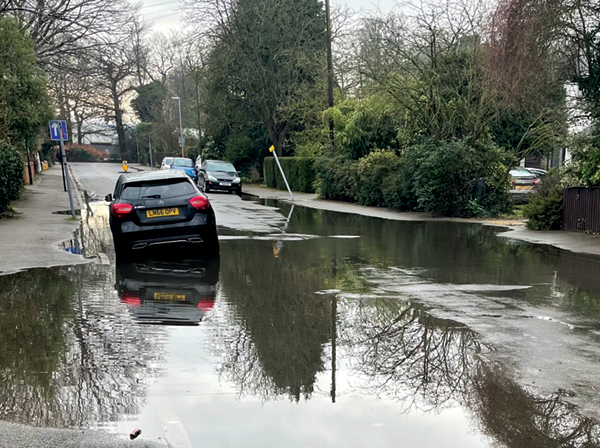 There’s no shortage of big schemes under discussion for Queen Edith’s – Cambridge South, East West Rail, CSET busway, Sawston and Linton Greenways, etc. But failure to resolve local irritations can shake people’s faith in the competence and good will of the powers that be. Here’s a small example from Sedley Taylor Road. It’s easy to suggest that a modal filter will encourage cycling and walking; yet if no effort is made to resolve a well-known local flooding problem, that modal filter (and everything else) looks like virtue signalling to the crowd rather than a meaningful contribution to improved quality of life.

How does that sound as a recipe for sustainable communities?