When Boris Johnson shared his wish for a ‘new golden age of cycling’ on 6 May, cycling advocates across the country waited eagerly for the details of how this would be achieved. Details of a £250 million investment to encourage more people to cycle to work following the lockdown period were widely reported in the media over the following days, and on 9 May, Transport Secretary Grant Shapps finally announced the details. Here’s a summary of the key points.

1) £225 million has been allocated to an emergency active travel fund for temporary measures such as pop-up cycle lanes, widened pavements and cycle- and bus-only streets

The aim of these measures is to get people moving again safely without causing further congestion. In order to maintain a safe 2m distance between people during the pandemic, public transport will be reduced to a tenth of its previous capacity in many areas and an already busy road network will be overcrowded if 90% of past passengers switch to driving as they return to work. This would lead to further delays for those who cannot or do not drive and rely on public transport to reach their destinations. The government wants those who already walk or cycle to continue doing so and to encourage more people to join them.

This money will come from the £5 billion announced for cycling and buses in February. Full details of how this will be spent will be set out in a new national cycling plan due to be published very soon, in line with the statutory Cycling and Walking Investment Strategy. However, the Department for Transport’s own research reveals that £6 billion will be needed to meet the target to double levels of cycling: some of that funding is expected to come from local sources.

The government expects local authorities to make significant changes to road layouts to give more space to cyclists and pedestrians, with all measures implemented within the coming weeks, to ensure an urgent change to travel habits before the lockdown is relaxed. The new guidance includes details of measures that should be implemented, including ‘school streets’, 20mph residential zones and modal filters. It also includes new designs for traffic signs. Evaluation of schemes must be included to encourage authorities to make temporary measures permanent where possible, enabling a long-term shift to active travel as the economy is moved ‘from restart to recovery’.

There has been a massive uptake recently in people using the Cycle to Work scheme that allows employees to save up to 39% of the cost of a new cycle or e-bike. The government will work with employers to increase uptake further as well as boosting bike-fixing facilities and beginning a new voucher scheme for repairs and maintenance.

Higher standards (long overdue) are expected for all permanent infrastructure in England. They will be monitored by a new cycling and walking inspectorate, headed by a national cycling and walking commissioner to develop an inspiring vision for active travel. This will be supported by a long-term budget for cycling and walking, along the same lines as that which already exists for roads.

6) Legal changes will be made to protect vulnerable road users

The UK is currently one of only five countries in Europe that does not operate a system of ‘presumed liability’ when it comes to traffic collisions. Presumed liability changes the hierarchy of our streets to put the most vulnerable first; it means that, in the event of a collision, the driver/rider of the heavier vehicle is held liable for civil damages unless they can prove they were not at fault. This means that cyclists, pedestrians and other vulnerable road users who are involved in collisions can be compensated fairly and quickly, avoiding the need for expensive litigation. More details on the government’s planned legal changes are expected later in the summer.

7) GPs will be encouraged to prescribe cycling and exercise

Another measure which will be part of the government’s new Cycling and Walking Investment Strategy, this idea has already been trialled in several areas of the country through schemes such as Cycling for Health in West Yorkshire and Wheelness in Inverness (both supported by Cycling UK), and nextbike on prescription in Cardiff.

Unfortunately, the first element of this campaign was a video from three professional white male cyclists in lycra, an image that doesn’t really fit with the everyday journeys under three miles that the government is looking to encourage. Statistics show that levels of cycling are up 70% in several areas of the country with many photos showing children and their families enjoying cycling for the first time.

9) Electric-assisted scooters and cars will be encouraged

The government wants to get e-scooter rental schemes up and running as fast as possible to help reduce car use and take pressure off buses for shorter journeys. A consultation about legalising e-scooters is underway, but for the moment their use is still restricted to private land. Trials of e-scooter rentals which were scheduled for next year have been brought forward to next month and are extended from four local authorities to every authority in the country that wants them. £10 million of additional support was announced for car-charging points on our streets and the creation of at least one ‘zero-emission city’ is planned with an urban centre accessible only by cycles and electric vehicles.

10) Pothole repairs will be accelerated

Although this point was made in the context of not forgetting families for which ‘the car will remain the mainstay’, better-maintained roads will benefit all road users, making them safer for those walking, cycling and using mobility aids.

Camcycle welcomes these moves to a safer and healthier society, and notes that one of the biggest changes to come out of the announcement was the stepchange in language around active travel. There are now clear signs of the political will within central government to increase cycling and strong expectations that local authorities act quickly to implement their plans. Answering questions after his statement, Shapps said that getting more people cycling would benefit everyone. He said that if ‘cycling increased by only 5% it would mean 8 million fewer car journeys, 9 million fewer rail journeys and 13 million fewer bus journeys’. He made it clear that more people cycling and walking would keep people safe during the pandemic, improve longterm physical and mental health, reduce air pollution and was good for retailers, business and the economy. Public information is telling people to ‘walk or cycle wherever possible’, so it is time for local authorities to roll out the emergency schemes needed to keep them safe. 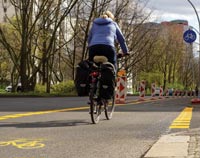 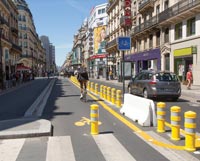 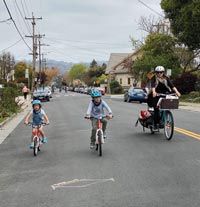 Covid-19 changed travel habits in a matter of weeks. As road traffic decreased to levels not seen in decades, many cities around the world responded by reallocating road space from cars to footways and cycle lanes. The need was prompted by pavements, cycle lanes and leisure trails becoming overwhelmed as people tried to avoid public transport and stay active. Off-road infrastructure for active transport is typically too narrow to allow for safe physical distancing and empty roads provided an opportunity to make active journeys safer.

In Berlin, many motor vehicle lanes were replaced by new or wider cycle lanes. Philadelphia closed miles of riverside boulevard to motor traffic. Minneapolis followed suit and Oakland officials created 74 miles of calm, filtered streets. Denver introduced pop-up cycling and walking lanes on 16th and 11th Avenues and around Sloan Lake so that people could distance while exercising, Stanley Park in Vancouver became a place for cycling and walking only, and traffic lanes were reallocated to cycling in Calgary. City officials in Budapest established a cycling network on main roads and Bogotá replaced miles of traffic lanes with new emergency bike lanes. Brussels announced the creation of 40km of additional cycle paths to ensure fewer people used public transport as restrictions were relaxed. Milan is widening pavements, adding 35km of cycle lanes and encouraging the use of scooters as a way of pushing alternatives to car use. Marco Granelli, a deputy mayor of Milan, said: ‘We worked for years to reduce car use. If everybody drives a car, there is no space for people, there is no space to move, there is no space for commercial activities outside the shops. We think we have to reimagine Milan in the new situation. We have to get ready; that’s why it’s so important to defend even a part of the economy, to support bars, artisans and restaurants. When it is over, the cities that still have this kind of economy will have an advantage, and Milan wants to be in that category.

France is encouraging people to cycle to keep pollution levels low as lockdown restrictions are eased. Under the €20 million (£17m) scheme, everyone is eligible for subsidised bike repairs and the funding will also help pay for cycle training and temporary cycle parking spaces.

The move is aimed at reducing driving when commuting or for short journeys to keep air pollution levels down as the lockdown is lifted. In normal times, 60% of journeys made in France are less than 3 miles.

The scheme, launched on 11 May in association with the Federation of Bicycle Users (FUB), involves a network of more than 3,000 repairmen registered on the FUB website who agree to fix any bike for up to €50, such as changing tyres or old chains. Citizens can go to these registered mechanics who will then be reimbursed by the state.

Paris has introduced an extra 50km (31 miles) of temporary cycle lanes and barred private cars from one of its major central roads, the Rue de Rivoli. It now has separate lanes for bicycles and for buses, taxis, emergency vehicles, disability access and certain deliveries. Local authorities across the country are also being encouraged to lay down cycle lanes.

The measures in Paris will remain in place for the duration of the pandemic but should they prove successful they will be made permanent, according to Mayor Anne Hidalgo, who is standing for reelection on 28 June. She said: ‘They have shown themselves useful, for mobility and reduction of pollution. I hope they can continue.’