National charity Sustrans produces Bike Life reports in collaboration with UK cities to give decision-makers the confidence, opportunity and evidence to talk about the benefits of cycling. The Greater Cambridge report was published in March; we asked Matthew Barber to talk about the report’s insights and Sustrans’ work in this region.

We already knew that more people cycle in Greater Cambridge than anywhere else in the country, but what do you think are the standout statistics from this report? What makes the area different from the other city regions surveyed?

It’s clear that safety concerns stop cycling being a travel choice for many residents – especially women – but what are the key things which would change their perception of cycling safety? How should we prioritise? The Greater Cambridge Bike Life report delves deep into trying to understand why residents don’t cycle, or what puts them off cycling more, and you are quite right: in every city and city region the main reason for this is ‘concern around safety’. As an average across all Bike Life cities, 47% of residents said they were worried about cycle safety, and this was still 39% for Greater Cambridge residents. It’s also worth noting that 50% of Greater Cambridge residents felt that ‘cycle safety was good’, compared to an average of 38% across the other Bike Life Cities. I also think gender is an important consideration, especially in the context of Greater Cambridge – 43% of women cycle at least once a week in Greater Cambridge compared to 17% in Bristol and 7% across Greater Manchester. So, whilst it is clear Greater Cambridge is considerably outperforming other Bike Life cities, there is still room for improvement; let’s not forget 15% of Greater Cambridge residents don’t currently cycle but would like to, and of those already cycling, 47% feel they should cycle more. Consequently, the focus needs to be on that 15% and that 47% respectively, and to change their behaviour it is all about high-quality separated infrastructure, and routes where residents can make their everyday trips where they are prioritised over, and separated from, motor vehicles.

The focus needs to be on the 15% of residents who don’t currently cycle but would like to, and the 47% who feel they should cycle more. To change their behaviour it is all about high-quality infrastructure and routes where they can make everyday trip

More than 80% of residents want cycle tracks along roads which are physically separated from traffic and pedestrians, with the vast majority supporting building more of these tracks, even when this would mean less room for other road traffic. But there are only 5 miles of protected cycle track in Greater Cambridge. What does Sustrans think is the quickest way to increase this?

If I’d written this pre-COVID-19, I think my response would have been very different, but in these difficult times, there is a renewed sense of optimism about getting even more people cycling; I can’t remember a Prime Minister ever saying, in a public address, that he would prefer us all to walk or cycle to work. With the announcement of the £250 million of funding for emergency measures to prioritise walking and cycling, and with statutory guidance which enables road space reallocation, pop-up cycle lanes and School Streets, there is a unique opportunity for local authorities to embed behaviour change, and for cycling to become the default social distancing transport option. At Sustrans, a lot of our projects are community-based, often using tactical urbanism thinking, so we are big fans of pop-up to permanent. I hope that key arterial routes in Greater Cambridge are prioritised, and high-quality temporary interventions are considered e.g. using crash barriers, or light-segregation, such as ‘Orca Wands’. I also hope attention is paid to the county council’s Local Cycling and Walking Infrastructure Plan (LCWIP), which has been developed using data from Camcycle; this should really help to inform which corridors need to be prioritised, as there is untapped potential for higher levels of usage.

The report shows that levels of cycling are quite equal across different genders and ethnic groups, but that there is more to do to increase levels of cycling among those in non-professional occupations or not in work, those over 65 and those who have a disability. What do you think are the most important actions that would help get more people cycling?

In Greater Cambridge 82% of residents have access to a bicycle, compared to an average across Bike Life cities of only 50%; this again demonstrates the culture of cycling which exists in Greater Cambridge, but what it also means is that some of the usual standard support interventions may not be as relevant or effective. Having said that, 35% of Greater Cambridge residents would find cycle training and route information beneficial, and 35% would find an e-bike useful. I think that last point is particularly pertinent, especially when viewed against the 29% of residents who feel they live too far away from their destination (the average across Bike Life Cities is 20%) – so projects like the Cambridge Greenways work, married up with an e-bike rental/loan scheme, could be especially interesting.

According to the report, 64% of residents want to see more government investment in cycling. What is Sustrans already doing which would help achieve this?

We continue to play a crucial role, alongside the Walking and Cycling Alliance (made up of the Bicycle Association, British Cycling, Cycling UK, Living Streets, Ramblers and ourselves) in engaging with, and presenting the case for increased funding for active travel to, the Department for Transport, the Treasury, as well as other Central Government Departments. We also work closely with the majority of local authorities across the UK to support them, but also to give them the confidence and understanding (e.g. using our Bike Life reports) that funding active travel interventions makes sense on every level. This is particularly relevant to Cambridgeshire, owing to the Combined Authority and the way it receives devolved transport funding.

Work is underway to construct the Chisholm Trail – a new, mostly off-road link from the north of Cambridge to the south. This is the result of over two decades of Camcycle campaigning, mapping the route and taking umpteen stakeholders on tours of that route. A huge number of other achievements for cycling have been made through campaigning and working together over the years. What does Sustrans think is the most effective way for local campaigners to make a difference to the cycle routes where they live?

The work you’ve done over the years to bring the Chisholm Trail to fruition has been very impressive, and it is the perfect example of why campaigning is important: ensuring that ideas, schemes, and dreams remain on the table, and in turn, ensuring momentum and interest are built.

My immediate recommendation to local campaigners would be to familiarise yourselves with the LCWIP process (and ensure your routes are considered) – these are long-term plans (over about ten years), which identify key walking and cycling interventions (which are based on data and evidence). I am fairly confident that over the next few years, if funding does become available for walking and cycling, then LCWIPs will be the vehicle for delivery.

I’d love to see a low-traffic neighbourhood project get funding, something truly community-based where our streets become spaces to play in, socialise in and to walk and cycle safely through. That would be great to see in Cambridge

What’s happening in other areas of the country that we should be inspired by?

For some time I’ve been engaging with Cambridgeshire County Council and the Combined Authority on running a low-traffic neighbourhoods pilot project, using our Sustrans Co-Design Methodology – I’d love to see a project like that get funding, something truly community-based, where our streets become spaces to play in, socialise in, and to walk and cycle safely through. I’d encourage members to take a look at ‘Our Active Neighbourhood’ in Levenshulme, Manchester; something like that would be great in Cambridge. I also think Cambridge needs to develop a programme around School Streets, and who knows, hopefully the announcement on emergency measures may act as a catalyst. We’ve delivered two School Streets projects in Peterborough, and the feedback from residents, teachers and parents is overwhelmingly positive – the time is certainly now, when it comes to considering how our schools return to capacity in September.

Finally, what is Sustrans’ vision for the future of our area?

I hope that Greater Cambridge continues to lead the way nationally, particularly in terms of high-quality infrastructure, which truly prioritises cycling, and reduces interaction with motor vehicles – in turn, I hope to see cycling levels across all demographics grow further. I’d also like to see the culture present in Greater Cambridge continue to permeate nearby towns and cities (and I’m not just saying that as a Peterborough resident), and with the Combined Authority there is an opportunity to move the agenda forward, so that places like Ely, Huntingdon, St Neots, Wisbech and Peterborough can learn from Greater Cambridge, and we begin to see cycling levels increase across the region.

Who cycles in Greater Cambridge? 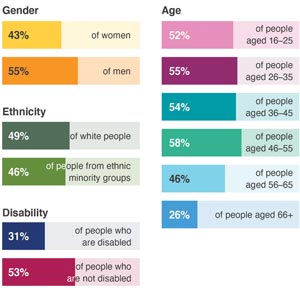 £76.5 million economic benefit for individuals and the city is created each year by people cycling in Greater Cambridge. 373 long-term health conditions are prevented too, saving the NHS £2.4 million.

18,00 tonnes of greenhouse gas emissions are saved annually in Greater Cambridge. Every day people cycling in the area take up to 38,000 cars off the road.

42% of residents support building more protected cycle lanes even when this would mean less room for other road traffic.

The Greater Cambridge Bike Life report was launched on 4 March at an event in Eddington and includes many photos of Camcycle members! It includes results from an attitudinal survey conducted in summer 2019 by independent social research organisation NatCen which gathered responses from a group of 1,403 residents aged 16 or above in the Greater Cambridge region. The survey is representative of all residents, not just those who cycle.

Sustrans is part of the Walking and Cycling Alliance, a coalition which was established in 2018. Together with British Cycling, Cycling UK, Living Streets, The Bicycle Association and The Ramblers, they launched ‘Moving the Nation’, a vision for active travel which called on the government to enact policies such as a 20mph speed limit on most roads in built-up areas, a ban on pavement parking and a revision of the Highway Code to prioritise safety for those walking and cycling.

Camcycle has also worked with other members of the Walking and Cycling Alliance and is an affiliated member of Cycling UK, which recently promoted our Spaces To Breathe campaign to Cycling UK members in the Greater Cambridge area.

In 2014, Camcycle published ‘Making Space for Cycling’, a cycling design guide for new developments and street renewals. It was endorsed by every national group including The Bicycle Association, British Cycling, Cyclenation, the All-Party Parliamentary Cycling Group and the Cycling Embassy of Great Britain.