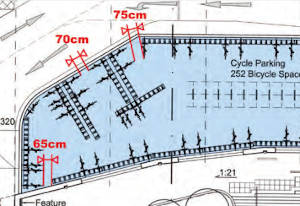 Over the summer, the city council consulted on a proposed earlystage redesign of the Park Street multi-storey cycle and car park. The car parking would be moved underground, with a cycle park on the ground floor, and an aparthotel above it. The problem was that the cycle park was shown with insufficient space and the architects had chosen to employ ‘semi-vertical’ cycle racks to fit into the space. We objected immediately that the Cambridge Local Plan expressly forbids the use of semi-vertical cycle racks. Councillor Tim Bick brought us together with officers from the city council to discuss changes to the design. When the formal planning application was finally submitted, we could see that the officers had widened the cycle parking area, removed all the semi-vertical cycle parking and replaced it with high-low stands, similar to those found on Peas Hill. While not ideal, this is a significant improvement and could be permitted under the Local Plan. However, we submitted an objection to the principle of rebuilding a car park on this site at all. The city council has declared a climate emergency, and in view of this, it is inconsistent to build a car park in the city centre at all (apart from some provision for blue badge holders) because it encourages people to drive into the centre of Cambridge. In addition, we noted some places where aisle widths for the high-low cycle stands fell below the required dimensions, made some suggestions regarding the area for cargo cycle parking, pushed for the access driveway to be redesigned with pedestrian priority, and made a series of recommendations regarding security and CCTV based on the lessons learned from the station cycle park.

As part of outline planning permission S/2682/13/OL from 2016, the Wing developers had obtained permission for a new junction on Newmarket Road that would also entail moving one of the driveways of the flying school on the southern side of the road. They filed an amendment application to modify some details of that junction design, which included adding a small buffered cycle lane of 1.25m width. We responded and noted that the original junction design had some old-fashioned elements that could usefully be improved given that cycling design standards had become more rigorous over the past few years. In particular, the flying school driveway currently has a zero-visibility crossing for pedestrians and cyclists that they weren’t proposing to improve, while the proposed staggered Toucan crossing would be difficult to use for people cycling with trailers or cargo cycles, and a nearby petrol station interrupts the northern side pathway twice. Working together with the planning officer, the applicant’s transport consultants and the highway authority, we reached a compromise that included the following improvements: the shared-use pathway crossing the new flying school driveway would gain improved visibility with priority for walking and cycling, the buffered cycle lane would be widened up to 2m, and the southern landing of the Toucan crossing would be made more spacious under a separate, more specific planning application. Unfortunately, we were not able to obtain improvements to the staggered Toucan crossing nor the petrol station access points.

This application proposed to redevelop the remaining older council flats on Colville Road, renovating the site and increasing the number of homes. We were concerned that the original site plan substantially harmed the footway along Colville Road by stripping out the existing trees and grassy planting in favour of car parking. We also noted dangerous driveway designs that would have cars exiting in reverse gear with zero visibility, and inconsistencies on the internal site paths. A revised site plan was submitted, retaining the planted verge with trees, and improving visibility and the design of the internal pathways. We also ensured that there would still be an accessible link between Poppy Close and Colville Road.

This application has proposed a major project along East Road that would see the existing bus turnaround become a hotel site, while the section of East Road immediately north of Norfolk Street would be completely rebuilt with walking, cycling and bus priority. We were pleased to see that the new design for East Road contained much easier road crossings, expanded bus stop platforms, protected cycleways and plenty of opportunity for landscaping. In that section, it is one of the widest roads in Cambridge; its current car-centric, 1960s-style design is unpleasant and dangerous for cycling and walking. Our only concern regarding the street design was that the details of the protected cycleway were in need of substantial refinement; some severe inconsistencies were undermining its purpose. Nonetheless, there is more than sufficient space and we are confident that continued discussion can resolve all the issues. On the other hand, the development of the hotel site itself will reduce the existing 124 public cycle parking spaces in front of the Grafton Centre to only 56. The balance will be redistributed into spaces a significant distance away and with much less natural surveillance, such as the car park behind the buildings. We objected to this loss of cycle parking spaces for Grafton Centre and cinema customers, but the planning officer has nonetheless recommended the scheme for approval. As of this writing, the decision on whether to grant planning permission has been deferred following a lengthy debate at the planning committee meeting on 6 November

The latest parcel of Northstowe to come forward proposes 406 homes, by developer Urban Splash. Our primary concern about the development is that some of the cycle parking is proposed to be in the form of ‘vertical’ cycle racks that require lifting. Such cycle racks are very difficult for many people to use, especially for people using heavier bikes or accessories such as baskets, pannier bags and child seats. Anyone with reduced mobility or who is using a tricycle or cargo cycle has no chance at all. We believe that vertical cycle parking does not qualify under policy HQ/1 of the South Cambridgeshire Local Plan, which requires cycle parking to be ‘safe, secure, convenient and accessible’. Therefore we have filed an objection to this application. We have also sent representatives to attend Northstowe consultation events and convey our concerns about vertical cycle racks; we hope that similar propositions will not be made in future.

The applicants have put forward the first stage in the redevelopment of a former green belt site between the A1307 and Wort’s Causeway. We have objected to this application because (a) it allows motor traffic to pass through the middle of the site, putting residents in potential danger, (b) the primary cycle route is relegated to the edge of the site, (c) there is a strange ‘kink’ in the cycle route that would render it unusable by many people, (d) no safe cycle route has been planned for the children who would probably go to school in Cherry Hinton or at Netherhall, (e) the sketches of the urban form shown in the Design & Access statement appear to show a heavily cardominated style of development, and (f) the A1307 cycle route passes in front of the site but the proposed new access junction would simply interrupt it and provide no safe crossing for people walking or cycling along Babraham Road.

If you’d like to get involved by helping us respond to planning applications, email us at contact@camcycle.org.uk or find out more at Cyclescape thread 4290