On 19 March, the Department for Transport published a report entitled ‘Future of Mobility: Urban Strategy’. The document sets out an approach to transport which makes the most of new transport technology while addressing the challenges caused by the huge growth in motor transport since the 1950s.

One of the principles of the government’s approach is that walking, cycling and active travel must remain the best options for short urban journeys. In England 45% of all journeys taken by urban residents are under two miles. As well as discussing the benefits that cycling brings in terms of health, air quality and reduced congestion, the report mentions use of bike-share schemes, e-bikes and cargo bike delivery.

Xavier Brice, CEO of Sustrans, welcomed the report saying: ‘Over the next decade technology is going to drive a revolution in transport … that could result in greener and more convenient travel for everyone. But we need to start with the end in mind. What type of places do we want to live in? What type of lives do we want to lead? And nothing is better at creating healthier places and happier lives for everyone than investing in solutions that make it easier to walk and cycle.’

Stuart Hay, Director of Living Streets Scotland, said the move would ‘help to create safer and more welcoming streets for all’ and encouraged the relevant powers in England and Wales to take a lead from the Scottish ruling.

Teachers call for urgent action on air pollution outside schools

A Sustrans survey has found that 63% of teachers would support a ban on cars and buses outside schools. One in three teachers told the walking and cycling charity that they were worried about air pollution and 59% want the government to take ‘urgent action’.

When asked what they thought would reduce levels of air pollution outside schools, over a third of respondents (34%) believed that encouraging more people to walk, scoot and cycle would help reduce toxic fumes, followed by educating the school community about the causes and effects of air pollution (28%) and school road closures (26%).

At the County Council Economy and Environment Committee in March it was agreed to install ducting and access chambers for optical fibres on county infrastucture. The officer report specifically mentions the Busway, the Chisholm Trail and the Linton Greenway.

This is part of a larger plan and joint venture to utilise the assets of Cambridge University’s existing ‘Granta Backbone Network’ – a high-quality, high-capacity network, established 25 years ago (see map) together with ducting on county assets. Installing ducting and access chambers during the construction of such things as the Chisholm Trail or Greenways adds next to nothing to the overall costs, yet adds extra benefits for decades. It’s a good example of groups getting out of their ‘silos’ (underground ducts) and working together for the good of us all.

Installing ducting must be a no-brainer, but the positioning and quality of access chambers on the cycle network will be crucial. Distorted or badly positioned ironwork is a hazard for those cycling, although neither is as bad as tram lines or poor quality reinstatement following trench works by utility companies.

I gather the intention is that, where practical, ducting will be installed on all new Greenways.

So although you, on your bike, may be speeding along much faster than the motor traffic stuck in queues, there may soon be photons travelling below you at close to the speed of light.

Have your say on Cherry Hinton Road improvements

Cambridgeshire County Council is consulting on plans for Cherry Hinton Road, following a 2015 survey which found that 73% of respondents were in favour of segregated cycle lanes, even if on-road parking bays had to be removed.

We’re pleased to see the options presented in the survey that will make cycling safer and easier including removal of on-street car parking and shared-use pavements, cyclist priority over side roads and installation of bus stop bypasses. It is disappointing that the scheme will include some sections of 1.5m advisory cycle lanes. However, given the limited width of the road, it is unlikely we will see improvements to this unless compulsory land purchases, dramatic road redesigns and/or rerouting of traffic become palatable to the county council.

It is also disappointing that the Hills Road junction will still not have an official way for cyclists from the Cambridge Leisure Park to join the road, an issue we previously raised with the council.

Please complete the online survey by 18 June to show support for the options that will improve safety for cycling including:

Find out more and join the discussion on Cyclescape thread 4741

Complete the online survey at tinyurl.com/cherryhintonroad

Fen Road is the most tricky and dangerous road I use in Cambridge. I am a confident cyclist and my route takes me across the city from CB1 (Beaumont Road) up to the Science Park. Since Cambridge North station opened I’ve used Fen Road, from the Green Dragon bridge up to the level crossing. My commute means that I use the road around 8.30am and 5.15pm.

The main problems I’ve noticed are as follows: 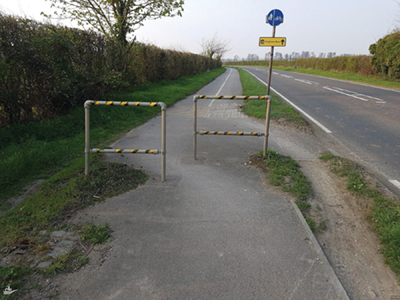 Do you have an idea for a small change that could make a big difference for cycling in and around Cambridge? The summer Local Highways Improvement (LHI) project deadline is coming up. We will be preparing a list of small projects that could be candidates for funding. In the past we’ve worked on changes to enable inclusive cycling (and walking), such as removing a difficult barrier or getting a dropped kerb where needed. We are open to many different kinds of ideas, however. Please send us an email at contact@camcycle.org.uk and let us know.