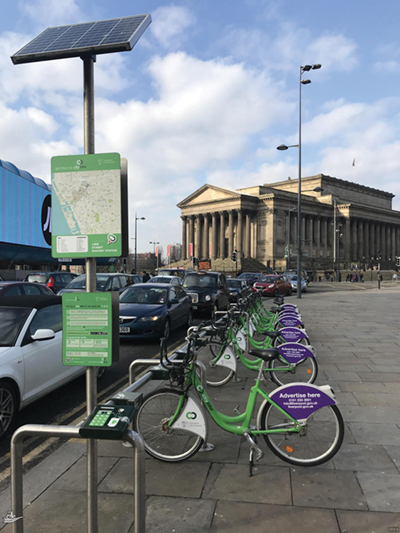 Liverpool has the largest bike-hire network in the UK outside London, and in the central area there are lots of highly visible green and white bikes at stainless steel docking stations.

I found the bikes were quite good to ride. They use a shaft drive and a three-speed Nexus hub gear. It felt to me like a normal bike, just a little heavier than usual with the extra steel and plastic coverings necessary to make it robust enough for the street environment. The main difference I noticed was that they have pneumatic tyres, and I find that makes the ride so much more enjoyable compared to the dead feel from the road that comes with the solid tyres of the dockless bikes of Cambridge.

Central Liverpool has a lot of pedestrian areas, but there’s a six-lane highway to cross to get to the docks area. I cycled from there two miles south towards Dingle on the riverside path. It’s on National Cycle Network route 56 but is mostly quite cobbled – OK for a leisure route, but I don’t think anyone would really want to ride that to get anywhere fast.

Away from that I found myself climbing up towards Sefton Park. The NCN route was hard to follow as the signage was very intermittent, and I frequently went wrong and had to backtrack.

The long and winding road

The next day I cycled out of the centre towards Anfield (Liverpool Football Club’s ground, which is in Everton). Despite following NCN route 810 signs I soon found I was at a major multi-lane road intersection, peering around the junction hoping to see the helpful little blue signs. I had to use the CycleStreets app to get me back on track.

Hills are a bit of shock to the regular Cambridge rider, and I slowly wound my way up into Everton Park, which has splendid views of the centre. Then I rode through an area that reminded me of sectarian areas of Belfast before coming to the area dominated by the red colour of the Anfield Stadium, where it rises above the skyline of the terraced houses. In stark contrast, and just half a mile away, the colour is blue and comes from Goodison Park (Everton’s ground) visible at the end of the many terraced streets that abut it. NCN 810 cuts between the two through Stanley Park and I got lost several times due to missing or small signs. Many roads in this area are in poor condition, and there are few concessions to cycling, most notably where roads have been plugged to block through motor traffic but no dropped kerbs are provided.

Heading back into the city centre I tried following Liverpool’s own ‘Route 3’, which was straighter on the map than NCN 810, but I soon found myself on a very busy road. Compared to the NCN route this was very severely lacking in signage and I realised I had gone wrong when I was riding on the footway in an area where there were no dropped kerbs.

My niece asked me about getting her own bike. The local cycling campaign magazine listed a secondhand bike shop near the student area, where for £100 she got a decent hybrid. We explored the NCN 56 route between her university residence and the centre, which seems to be OK.

Reviewing the trip on the train back to Cambridge I was horrified to learn that a cyclist had been killed on the Friday just a few hours after we’d arrived. The Liverpool Echo article had the line: ‘one of the most deadly cities for cyclists in Britain’. Hopefully, the users of Liverpool’s many shared bikes will inspire the authorities to invest in proper cycling facilities in order to ensure a positive future for the network.