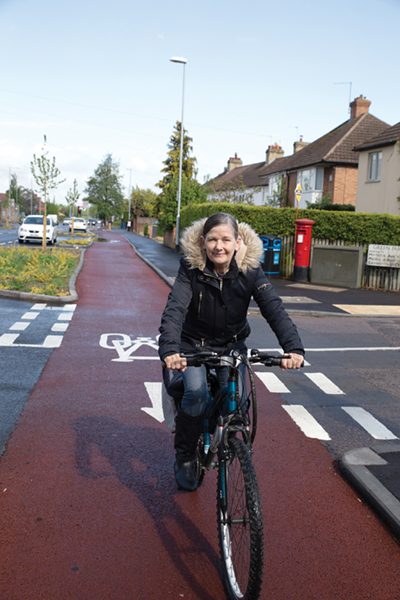 In March, we were excited finally to be able to try the new segregated cycle lanes on Green End Road delivered by Greater Cambridge Partnership as part of the Cross City Cycling scheme. We’ve been critical about other parts of the scheme in this area (the painted lanes on the southern part of the road don’t protect vulnerable road users and the Nuffield Road phase is currently on hold), but the northern section is starting to shape up nicely and demonstrate the benefits of providing dedicated space for cycling. We’re particularly pleased that the cycleway has priority over side roads and is set back from the main road to allow space for cars turning in to give way to passing cycles.

These changes were long overdue as the shared-use pavement at the Milton Road end, opposite the Co-op, was one of the worst sections of cycleway in the city, throwing cyclists and pedestrians together in a narrow space filled with obstacles such as tree roots and signposts. The new layout makes the most of the width of the road at this end, using planting and parking spaces to separate the new redmac cycleway from the main traffic lanes. Bus stop bypasses and an improved zebra crossing have also been installed. 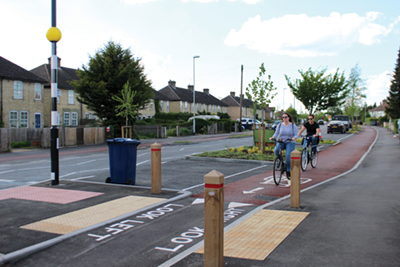 Green End Road is both a residential street and a key commuter link and the cycleway scheme delivers for both, with improved facilities for pedestrians and cyclists and a more attractive street for residents, with enhanced trees and shrubs. It’s reminiscent of one of the most popular pictures in our Making Space for Cycling guide: we used to have to refer to photos of the Netherlands when explaining our policy on designing for streets, so it’s great to have a homegrown example at last.

The concept for the scheme was born out of the Green Up Green End Road campaign, developed by County Councillor Ian Manning in 2012 when residents would often ask why the street was called Green End Road when it wasn’t actually very green! Camcycle contributed to workshops with cycling officers and local residents and shared visuals of road layouts (see diagram on the right). Cllr Manning says the project has come to fruition because the vision was maintained throughout, despite setbacks and challenges. He says that it is important to work with both residents and commuters to get something good done: ‘the end result here is high quality cycle lanes for cyclists (when it’s finished), a greener environment for residents and more space on the pavement for vulnerable pedestrians’.

A spokesperson for Greater Cambridge Partnership said: ‘We are thrilled that we are close to completing the Green End Road Cross City Cycling scheme, one of five projects which aim to improve links to schools and workplaces. The route is already being well used by cyclists and also those on mobility scooters. The final elements of the project in the Nuffield Road area will be completed before children return to school in September.’ 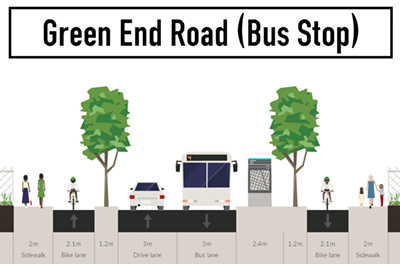 Although we’re very pleased with the new lanes (and are grateful to local councillors for pushing for them) they will make up just a short section of most people’s journeys, so the way they link up to the rest of the cycle network is important. We look forward to improved junctions at Nuffield Road and Milton Road and will continue to campaign for a segregated link through Nuffield Road connecting up with the Busway cycleway to Cambridge North station.