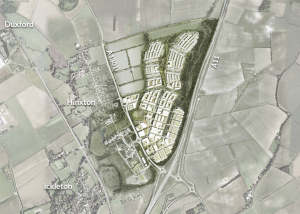 We objected to this application because it has proposed a large expansion of the existing campus onto the triangle of greenfield land between the A11, the A1301 and the A505. This would become a massively motor-centric development despite their best intentions, attracting thousands of new car trips onto the nearby roads. It is over 1.5 miles from any railway station and would be very difficult to serve using public transport. Instead of expanding in a difficult location that would damage the environment we recommended instead using brownfield locations near railway stations such as Whittlesford Parkway (which is due for some much needed upgrades to accessibility) where sustainable transport would have a chance.

However, should the district council decide to grant permission to this site then we pointed out a few additional problems. At the core of the plan is a proposal to turn the A1301 into an urban street rather than a rural distributor road. That would involve lowering the speed limit, adding shared-use pavements, and facing buildings onto the street to create an urban environment. We have pointed out that this proposal violates the principles of Sustainable Safety as practised in the Netherlands. It introduces incompatible uses onto the A1301, which will have to retain its distributor functionality to some extent. That means it is likely that motorists will be tempted to speed and put people walking and cycling at risk. Instead, we have recommended keeping the A1301 in its distributor role and creating new, smaller streets for buildings and the urban environment, without heavy volumes of motor traffic passing through. Of course, those smaller streets would still need to be connected with a walking and cycling grid to allow foot and cycle traffic to circulate easily. We also pointed out that should the North Uttlesford development proceed there will be a very strong desire line between the two projects, which are either side of the A11. Without a proper walking and cycling bridge, though, they might as well be on the opposite ends of the earth as far as sustainable transport is concerned. Therefore both projects should contribute to ensuring safe and grade-separated links for walking and cycling between them.

Back in July, developers proposed an interesting concept for a new residential apartment building in Eddington. It would have abundant cycle parking and facilities at the ground floor and basement, but it would also be designed to make it easy to take your bike upstairs into your flat and park it there if you liked. We were supportive of the concept, but pointed out several significant flaws in the design, including mistakes made with the cycle parking layout, overly steep access ramps, insufficient headroom above the ramps, and potential safety issues with ramp usage. At the end of January the developers published their latest revisions and it appears that they have incorporated all of our recommended fixes.

We’ve objected to the planning application for Mill Lane redevelopment for student accommodation, facilities and commercial units. The application includes an inappropriate ‘courtesy crossing’ on Trumpington Street that would not give pedestrians the required priority, and includes insufficient cycle parking, inappropriate designs for car traffic-calming and an underestimation of the number of cycling and walking trips. Cambridge County Council Highways recommended refusal of the application and Cambridge Past Present and Future have also objected, with similar concerns about the treatment of traffic around the development.

The junction of Mill Lane, Trumpington Street and Pembroke Street is notoriously difficult and dangerous for people cycling and we would like to see a radical reprioritisation here as part of this project.

In November 2017 we campaigned against a previous application for this building on the grounds that it would destroy the existing segregated cycleway leading to Cambridge North station. That application was then refused and later resubmitted as S/4478/17/FL with the cycleway intact and substantial improvements to cycle parking.

Since then the applicants have been keeping in touch with us about changes to the building and their ramifications, which are now submitted as a variation application S/4824/18/VC. Much of the cycle parking has been moved into the basement owing to building changes; however, they are keeping at least twelve cargo-cycle spaces at ground level for people who need them. There will be a dedicated stairwell with two cycle-wheeling ramps. The gradient will be slightly worse than required so they intend to install motorised assistance mechanisms on the wheeling ramps. They have checked tracking diagrams of cycle movements to ensure easy access onto and off the ramps. This will hopefully prevent a repeat of the 1 Station Square fiasco. Outside the building, during construction works the cycleway will have to be dug up to install utilities, before being resurfaced into its final, fully-delivered condition. Several pre-existing problems with the cycleway should hopefully be fixed, and the county council has been given money to create bridges to Cowley Road across the public drain, thus finally providing that protected cycleway link between the industrial estate on Cowley Road and the station. However this work will continue until December 2020, so a diversion will be put in via the Busway path. It is an unfortunate closure but unavoidable, and we are looking forward to a greatly improved cycleway that will be ready for all the new development expected around it.

Would you like to get involved by helping us respond to planning applications? Trustee Matthew Danish recently ran a workshop for volunteers; you can view his slides and find out more about supporting Camcycle in this way at Cyclescape thread 4290