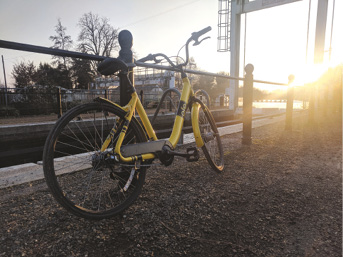 The Chinese dockless bike-sharing company, Ofo, has now ceased operating in the UK. It has left behind many of its distinctive bright yellow step-through bikes on the streets of Cambridge, and many other UK cities.

Ofo arrived in Cambridge in April 2017. The dockless nature of the Ofo bikes meant you had to use a smartphone app to find and unlock bikes near you. It charged an hourly fee, and you could leave the bike anywhere you liked. Unfortunately, this meant many bikes were left blocking pavements and pathways. Camcycle originally raised these as potential issues back in March 2017, along with the potential for vandalised bikes abandoned on the streets and verges of the city. Ofo originally said they would pick up reported bikes within
12 hours, but there were reports of bikes not being picked up for several days. It soon became apparent that some people knew how to unlock the bikes without using the official app – and once opened, the lock could easily be removed from the bike. In some parts of town it was more common to see such a ‘liberated’ Ofo bike than one still under company control.

Originally founded in 2014 by members of the Peking University Cycling Club, Ofo had raised over US$2 billion from several rounds of funding. It expanded internationally in 2017 and at its peak had deployed over 10 million bikes in 250 cities worldwide. Over-expansion, however, meant it suffered financially in 2018 owing to high operating costs, and the company drastically reduced its international operations. The initial withdrawal from UK cities, including Cambridge, happened in July 2018 as they focused operations on London. In January 2019, Ofo left London too.

Mobike, a rival dockless bike-sharing scheme, arrived in Cambridge in June 2018, just before Ofo’s official withdrawal. It remains operating in the city, with 100 orange-wheeled bikes.

Could air pollution concerns be the key to unlocking better transport infrastructure?

Air pollution has been regularly in the news over the past few months as evidence mounts of its health impacts. Deaths from asthma have risen over 25% in a decade and a recent scientific study concluded that exposure to air pollution was as bad for pregnant women as smoking in increasing the risk of miscarriage. Another piece of new research found that young people were three to four times more likely to have depression at 18 if they had been exposed to high levels of air pollution at age 12.

On Thursday 17 January, the city council signed up to the Oxford Charter for Cleaner Air which calls for the government to lead on the issue, removing polluting vehicles from city centres and investing in active travel.