After a two-year process of public feedback, consultation and revision, the final concept design by the GCP for Histon Road reconstruction was put to the Joint Assembly. In between an early October Histon Road workshop and the late October publication of the Assembly agenda, the plans changed. The strongly supported design for Gilbert Road junction with segregated footways and cycleways was gone, replaced by a version with narrow shared-use pavements. Victoria Road junction had had a similar treatment. The planned crossing at the bottom of Histon Road was now moved much further north, well off the desire line. Pedestrian priority at side roads was still missing in many places. Where there is a bus lane, the narrow cycle lane that is proposed to be squeezed up against it remains an ongoing concern. The Darwin Green junction is still a big question mark, as it is still a planning commitment that the developers deliver a motor-centric 20th-century design that nobody wants. 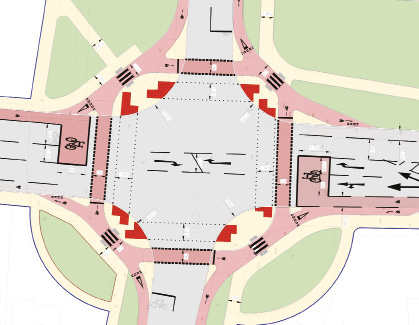 The confluence of these factors led us to withdraw our support for the scheme prior to the Joint Assembly. We submitted comments to the effect that the scheme no longer represented value for money and should be reworked to be more in line with the resolutions put forward by the Local Liaison Forum (LLF). The members of the Joint Assembly agreed that the change in plans should have been discussed by the LLF. The officers quickly agreed to hold another LLF before the Executive Board (in fact, they agreed to this even before the Assembly convened), the idea being that feedback from the LLF would inform the Executive Board decision on 6 December.

Meanwhile, new proposals for the Beelines scheme in Manchester were published and those provided a ‘flash of inspiration’ for the project team. Within a week they produced a fresh take on the protected and segregated cycleway design for Gilbert Road junction, one that they felt would garner support from the highway authority, various stakeholders and the public at-large.

These were received well at the Histon Road LLF meeting on 26 November, when many residents turned out to see the project team give its presentation about the changes to the scheme. One bad thing we learned is that an ‘off-peak’ loading bay has quietly been inserted into the proposed advisory cycle lane in front of the Midan shop near Victoria Road. Also there is clearly still a lot of anger from residents about the bus lane and the way it squeezes the walking, cycling and landscaping elements of the scheme. When the Chair asked how many people wanted to remove the bus lane from the scheme, nearly everyone raised their hand. Another issue that we stood up for is pedestrian priority at side-road junctions. There were a few loud voices in dissent but ultimately the LLF voted to support a resolution in favour of pedestrian priority, which we were happy to see.

Although the scheme remains flawed in some ways, we are heartened to see the project team able to respond quickly to at least one of the major concerns and produce a design that meets the principles of a segregated and protected junction. 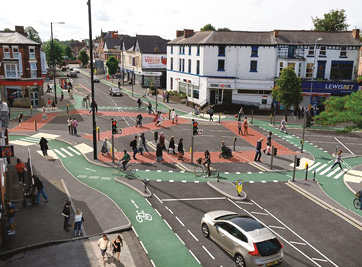 The new design makes it easier for pedestrians to complete a diagonal crossing movement during the scramble phase (when the lights are red for road traffic in all directions). The segregated cycleways are currently intended for scramble movement as well; however, one future benefit is that the larger set-back will make them easier to convert to concurrent operation in the event that British Cycling’s ‘Turning the corner’ campaign is successful. This process of proposal and review has been a learning experience for everyone involved (including us) and we hope that this will help future design processes for segregated walking and cycling infrastructure go more smoothly, especially with other important projects like Milton Road coming up next for review.

At the end of October, we published this set of images showing how much the presented junction design had changed from that which was consulted on.

The new Gilbert Road junction design, and the image from Manchester which inspired it.