A. A cycle ride aimed at, but not exclusively for, women and girls. Males are welcome too!

A. To encourage more women and girls to take up cycling as their normal method of transport in their daily lives.

Q. Why is the ‘Ride for Joy’ going to encourage that?

A. The idea is that by dressing stylishly in our normal clothes in a large group we will demonstrate to others how enjoyable and do-able it is and inspire them to have a go.

Q. Why do we want to encourage more women and girls to cycle?

A. Firstly, it’s fun and healthy! More cyclists on the road will help to make the roads safer, reduce traffic congestion and time lost,and reduce the number of vehicles on the road and emissions. Research carried out by Sustrans last autumn revealed that 79% of women in the UK never cycle. When asked, 67% of them said it was because they didn’t feel safe when cycling in traffic. Clearly, many women are not being represented when travel plans are designed. As a result of their findings, Sustrans subsequently motioned a petition calling for safer, separate cycling routes. 9,000 women signed the petition which was presented to Sadiq Khan, Minister for Transport as well as the Scottish Parliament and the Welsh Assembly in January 2010.

Q. What time does it start?

A. Converge on Lammas Land, Cambridge at 2pm, ride to set off around 2.30pm.

Q. Is there any cost for taking part?

Q. Is it a race or timed ride?

A. No. We will go at a leisurely pace in order to be seen.

Q. What is the route?

A. This won’t be finalised until the later but basically we will follow the various cycle routes through the city centre, winding up on Parker’s Piece around 4pm.

Q. What if it’s raining or the weather’s bad?

A. We will go ahead as planned. Wear brightly coloured wellies, groovy waterproofs and hats or cycle with brollies – as they do in Copenhagen and Holland. Explore the many cycling chic blogs which are springing up from all around the world for wet weather inspiration or do your own search on Google. Here are a few suggestions to get you going:- 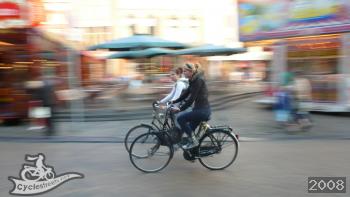