6 November 2007: After receiving more than 300 objections from Cycling Campaign members and members of the public, the company behind the Revolution Bar in Downing Street has withdrawn its planning application to extend delivery times. Had this gone ahead, it would have meant the Bar’s delivery vehicles continuing to repeatedly and illegally block the contraflow cycle lane.

The Highway Authority also wrote to recommend to oppose the application.

Thank you to everyone who sent an objection. Though we may have won for the time being, we would be not be suprised to find that some other tactic now attempted, so we will keep our eyes and ears open.

Of course, we can expect the current (illegal) deliveries to continue. However, the City Council has a sanction against the bar because of the original planning consent.

In its previous incarnation as the Rat and Parrot, and even more so since it changed hands to become Revolution, this bar on Downing Street between St Andrews Street and Downing Place has caused repeated problems for cyclists by persistently parking large delivery and contractors lorries in the contraflow cycle lane outside for prolonged periods. Deliveries here also often cause traffic jams. 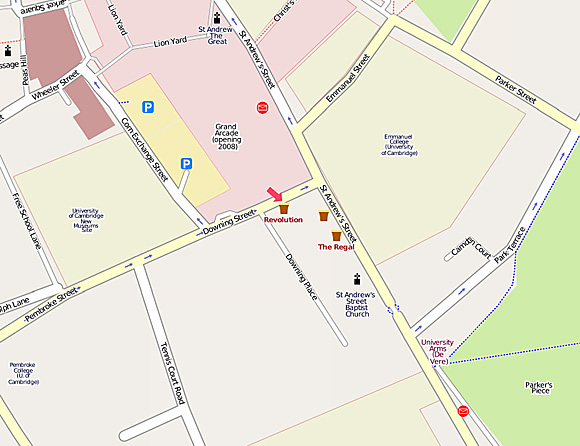 You can see some examples on our photomap gallery – only some of those are Revolution deliveries: the Grand Arcade construction work across the road has not helped either.

When planning permission for the Rat and Parrot was granted by the City Council, the Council imposed a condition restricting deliveries after 7.30am. The new owners are now seeking to relax this condition to allow them to deliver before 8am and between 9.30am and 4.30pm.

In fact, deliveries are not permitted at any time by stopping in the cycle lane (we have confirmed this with the County Council). However, it is the driver of the vehicle who is then committing the offence, not the premises. The police have been more than reluctant to enforce the law here: even police on the spot have have declined to take any action aganst an offending vehicle. This is in spite of the fact that a parked vehicle here forces cyclists into a narrow lane of oncoming traffic and puts them in a position where they may be committing an offence to pass it.

Revolution seem not to understand this. Either they are ignorant of the situation, or they expect their delivery drivers to commit an offence. In their letter supporting the application to relax the restriction, they fail to even mention or acknowledge the existence of the contraflow cycle lane that is central to the issue. Maintaining the planning condition means that there is the possibility of sanctions against the premises themselves.

There is no reason why the planning condition should not stand: nothing has changed materially for the new owners. Their justification is simply, in effect, that deliveries are currently incovenient. Perhaps they are; but their due diligence should have revealed that before they bought the bar. Parking in the contraflow lane is dangerous and illegal, not to mention inconvenient for cyclists.

(These are running totals)

The above shows there are almost ten cyclists every minute.

The number of pedestrians is likely to increase as a result of the opening of John Lewis.

Object to the application

Objections are not needed any more because the application has been withdrawn.

The new planning application is online on Cambridge City Council’s website. Though you can object online (don’t forget to press the “Inform the Authority that you object to the Planning Application” button), a formal letter of objection is generally better. These can be sent, before 7 November (preferably earlier, though the City Council has now extended the deadline from the previous 23 October), to:

quoting the application number reference “07/1106/FUL” and giving reasons for the objection (nothing has changed to justify it, danger and inconvenience to cyclists, traffic blockages, that it is an offence in any case, that they have persistently flouted the current condition etc.).

You don’t have to be a Cambridge City resident to object to a planning application, though you may wish to identify yourself as a cyclist who uses the contraflow lane to show why you are concerned about it.

It would be helpful if you can let the Cycling Campaign know if you have sent an objection.

You can read the Cycling Campaign’s own letter of objection on our letters page.