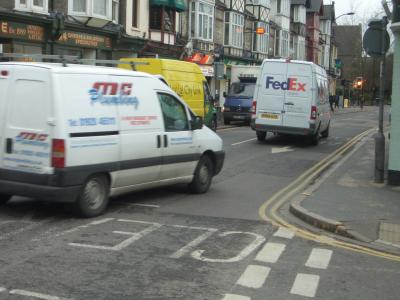 Sometimes making things better for cyclists is like wading through treacle. It took years of effort to get four one-way streets off Mill Road made available for cyclists to use in both directions (as is commonplace in Europe and applies to many other streets in Cambridge).

But after the mess the Council made of signing them, the way this was done is being reviewed.

The City Council has published details of the review of the signing (of Kingston Street, Mackenzie Road, Covent Garden and Mawson Road).

Official survey from the City Council

Please fill out the official consultation survey from the City Council.

Please also make clear, when filling it out, if you support the principle of two-way cycling.

In terms of the details, the Mackenzie Street proposal is the more-or-less standard way of doing things. The miserable planter at the end of Kingston Street has been used as a reason not to do it properly there – you may or may not agree.

There is also to be a public meeting at St. Barnabas Church, Mill Road on the 18th December at 7.30pm. Cycling Campaign members (especially those who live locally, but anyone else who uses these streets) are urged to attend because the opposition whipped up by Labour councillors previously to the whole idea is being revived.

Petersfield Labour Councillors have delivered this leaflet to houses in Petersfield:
http://www.camcycle.org.uk/map/location/15460/

You may wish to make contact with those councillors to politely make clear support for two-way cycling if you use those streets, especially if you live in the south-east of the city.

The e-mail addresses of the three current Councillors and the other prospective Councillor are:

We find it ironic that illegal driving is being turned into a reason to stop legal cycling. At no point in the leaflet is the illegal driving condemned, despite the existing signs (which we agree could be improved) being in the Highway Code.

The leaflet is, however, correct in stating that some Liberal Democrat Councillors opposed two-way cycling for some streets in New Town (Trumpington), a matter which the Cycling Campaign also deplores.

Our earlier petition – 277 signatures in one day 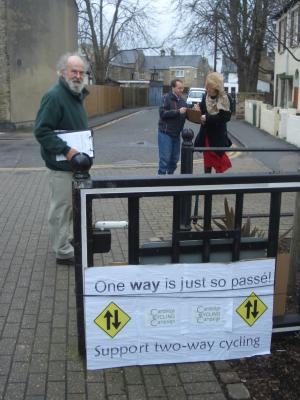 The Councillors’ leaflet mentions that there were two petitions against making these streets two-way. However, their leaflet fails to mention that our own petition had many more signatures than these two small petitions put together.

This map makes clear that there has been much local support for our position. Note the very heavy bunching of signatories in the Mill Road area. There is also support from the many people around Cambridge who use the streets:

Our archived page from 2007 on this issue is still online.