Cambridge City Council intends to move from having a full-time cycling officer position (actually 1.2 fte posts) to 0.5 posts, on the grounds that cycling issues should be the responsibility of everyone in a team, thereby not justifying the need for dedicated staff.

Currently the position is implemented as two part-time officers.

We believe it is essential that Local Authorities have dedicated Cycling Officers. Whilst in an ideal world, every person working in a local council would have full understanding and willingness to deal with cycling issues, that is not the case in practice. Dedicated staff act as an internal watchdog and are able to devote time to cycling issues.

The Council seems to be claiming that the change is not being made to save funds. However, the same volume of demands for cycling improvements will remain, so there is no obvious logical benefit to having non-dedicated staff doing it.

We challenge the City Council to confirm whether any of the the motivation for these changes is based on making savings.

What benefits has the Cycling Officer position provided?

Below we outline the benefits (as we see them) that the Cycling Officer position brings to the City Council and how it pays for itself.

This written question (question 6) by a city councillor also provides a good summary of the work done by the postholder as described by the City Council itself. Any of the initatives outlined there are subject to being stopped if there is insufficient dedicated officer time to undertake them.

This is the standard that new developments should meet. But with 0.5 staff that’s totally unrealistic: 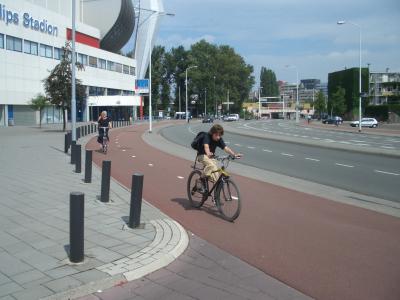 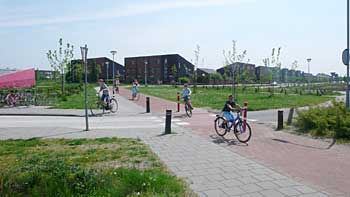 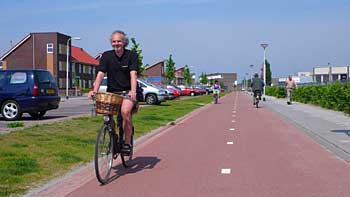 New developments affect travel patterns for decades. It is essential that these developments are fully scrutinised. Checking for cycling issues is as important as other issues like safety, layout, affordable housing, drainage, lighting etc. A major road without proper crossing facilities, or lack of cycle parking will mean people use their cars instead, however much ‘promotion of sustainable transport’ is done.

The number of planning applications in Cambridge City is overwhelming, and this is becoming worse as the major new developments around the city, bringing tens of thousands of new houses, move forward in the planning system.

Large planning applications often consist of thousands of pages of documentation, with large numbers of maps, tables and figures. For example, the first Northstowe planning application was an enormous box with at least 20 thick books worth of documentation. Analysing these is a job for dedicated professionals, paid to spend time spotting flaws that will cause future problems.

This is a job that cannot be left just to volunteers. Volunteers with day jobs simply do not have the time adequately to wade through the volume of material, though in our case we find some time to cover what is a tiny fraction.

There are seemingly already too few resources within the council to scrutinise everything properly. Time after time, planning applications have gone through without spotting problems. The result is that hostile cycling conditions are created, putting people off cycling.

Although planning is a district matter and transport a County matter, with large applications there are normally significant Section 106 funds provided for off-site infrastructure changes, and often these include changes in road layout. Such changes do not receive the public scrutiny that would occur if they were funded directly by the City or County Council. Cycling Officers currently pay a very valuable role in raising any issues both with the transport authority (County Council) and other interest groups.

The Arbury Park development in South Cambs provides a good example of the need for Cycling Officers to scrutinise plans in conjunction with planners. King’s Hedges Road was made massively less safe for cycling, and it is more difficult to cross than before. The result has been a drop in cycling levels, and a cutting off of the development from the rest of the city. These problems should have been spotted in the planning system many years ago. Some remediation work, costing the taxpayer tens of thousands of pounds, has been done, but the remaining road is still very hostile.

Time after time we have attended stakeholder meetings where the Cycling Officer present has spotted problems in developments that we would never have had time to spot. Each such problem has meant people not put off from cycling, and a saving of future taxpayer money on remediation works.

There is a clear need in the city for work to be done to crack down on irresponsible cycling and driving. The media often carries complaints from the public about the need for much more work in this area, both in terms of enforcement but also through softer measures. The issue also continually arises at Area Committees and other meetings.

The Cycling and Walking Officers, to give them their full title, have done much work to promote, in a variety of ways, responsible cycling. For instance:

It is unlikely in our view that officers not charged with direct cycling responsibilities would deal with these and other issues with sufficient dedication, and ensure that the more difficult balanced enforcement issues involved are dealt with sensitively.

The City Council’s environmental improvements programme has resulted in a number of enhancements to the public realm. This programme includes schemes like the current Riverside improvements that aim to enhance the environment for those cycling and walking.

As well as ensuring that these schemes properly cater for cycling, there has also been the need to balance the desires of other parts of the City Council not to cater for cyclists.

For instance, very modest proposals slightly to widen key paths across the commons used heavily by cyclists and walkers, seem to have been opposed by Open Spaces team members elsewhere in the council. In a city where these areas form such an important part of the cycle network, the need for an internal watchdog to make the case for allowing easier cycling here is strong, even if this means the loss of one metre’s width of grass.

An example has been New Bit, which seems to have taken a lot of officer time, both in the City and County Councils. The case for improving cycling, backed officially by the City Council, seems to have been subject to concerns by some officers within the City Council about widening of the paths. In fact, work on recreational paths elsewhere has shown that widening a path can reduce damage to adjacent habitat. Once people trample adjacent grass to mud, others spread even wider causing more damage. Another example has been the addition of an obstructive gate on Parker’s Piece, rather than restoration of the previous bollard.

In other Local Authorities (e.g. Edinburgh) there seems a more positive attitude to improving condition for cycling across open spaces. They recognise the huge benefit to both society (health, wellbeing and independence) and budgets (reduced congestion and lower pollution) of actively encouraging modal shifts away from motor vehicles.

We feel it is important that dedicated Cycling Officers exist, to make the case for improved cycling conditions when other streetscape and open spaces schemes are being developed and implemented.

4. Increasing levels of cycle parking around the city

Cambridge City Council has a major problem with cycle theft. It is continually being set as a priority at the Area Committees. Every bicycle stolen is potentially one person who will not cycle for many years.

A big part of the problem is the lack of secure cycle parking stands all around Cambridge (not just in the city centre, where the problem is most acute). Residential areas (e.g. Romsey and Petersfield) have virtually no cycle parking, with the result that bicycles are left blocking pavements and vulnerable to theft.

The City and County Councils have started in recent years to address this extreme shortage of cycle parking. But doing so has been fraught with difficulties, with some car owners objecting to the loss of single parking spaces and objections from other groups on various proposals that, following implementation, have not proven problematic in practice.

The City Council cycling officers have worked extremely hard to bring proposals for new cycle parking to fruition. Each location has required officer time to liaise with the public and with city councillors to make the case and help work up the plans.

Despite this, there are hundreds of locations that are in need of cycle parking. The Cycling Sorted website provides this evidence.

And these deal only with actual requests for cycle parking. Why have new food shops opened without any cycle parking whatsoever (Sainsbury’s on Regent Street, and M&S at the Beehive Centre) – and where is the proactive work to address this?

We think it highly likely that scrapping the full-time equivalent Cycling Officer position will lead to a marked slowdown in the recent progress on the cycle parking issue. The result will be continued high levels of theft, blocked pavements and general inconvenience of being unable to find a cycle parking space.

Cambridge City Council will not truly be able to describe the city as a ‘cycling city’ if not even a single full-time dedicated cycling officer post exists.

There is a huge amount more to be done, as the descriptions above outline. The Council should be increasing, not decreasing, its resources dedicated to the most efficient and environmentally-friendly form of transport in the city.

The best way to do this is to have dedicated staff with sufficient time to enable the large amount of work to be undertaken effectively. 0.5 members of staff does not fulfil that requirement.