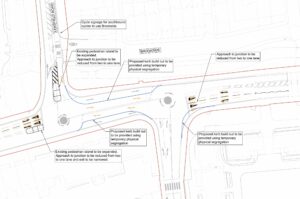 The county council is proposing some temporary changes to the double roundabouts at Trumpington Street/Road, Lensfield Road and Fen Causeway. These changes include lane reductions to improve road safety and widening of pedestrian refuge islands.

The double mini-roundabouts at Trumpington Street/Road, Lensfield Road and Fen Causeway have consistently been rated one of the top-5 most dangerous places in the county for decades. It’s a lethal combination of excessive lanes for motor traffic leading into jammed mini-roundabouts and near-zero provision for pedestrians. Therefore we are glad to see that the county is trying to consider some steps to alleviate the danger here. However, while things are moving in the right direction, it really doesn’t go far enough.

Starting with the positives:

Yes, the scheme is proposing road space reallocation in favour of walking and cycling. However, we believe it could be significantly improved.

At a first approximation, the following changes could be made to the scheme without resorting to traffic signals:

Ultimately, this junction should return to being under signalised control, however that will take a lot more money and time to design and build. In general, long-term traffic reduction measures for the city centre would also have a great benefit here, as the fundamental problem is too many cars.