The Broadway (and The Waits) 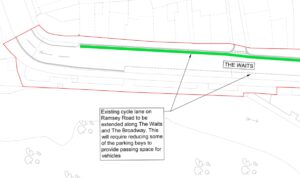 It is not very clear what the county council is proposing for The Broadway in St Ives, apart from the extension of a painted cycle lane along the adjoining street, The Waits. The text reads ‘The carriageway space of The Broadway is to be reallocated to provide a safer and more pleasant environment for pedestrians and cyclists. This may include cycle lanes and cycle parking facilities, blue badge parking spaces and pedestrian crossing points to better connect the footways. The number of parking bays will need to be reduced to accommodate these proposals.’

In principle we would like to support safer and more pleasant environments for pedestrians and cyclists and there is much potential at The Broadway, which is currently treated poorly as a rather dumpy car park and turning circle. However, with no details on exactly what they are proposing, we cannot comment.

No, the extension of a painted cycle lane on The Waits does not meet DfT guidelines, and unless significant road-space reallocation is being proposed for the rest of The Broadway then it is hard to see how this could be funded under the programme’s requirements.

Fundamentally the problem here is due to there being too many drivers in too small a space hunting for and attempting to squeeze themselves into parking spaces and creating a hazard for pedestrians and cyclists. Therefore, reducing the number of parking bays has the benefit of reducing the number of cars in the area as well as freeing up more space for people.

One method to deal with the conflicts is to create protected cycle lanes with the protection provided by marked bays for parking cars or cycles, similar to some sections of Green End Road in Cambridge.

We further note that the existing cycle lane on Ramsey Road is narrow and only runs in one direction, which makes it somewhat useless. It may be more sensible to widen the cycle lane so that it is bi-directional, but run it along the southern side of Ramsey Road, The Waits and The Broadway along with some form of protection such as lightweight segregation (e.g. wands or temporary kerbs). Since that side of the road runs along a watercourse, the number of conflicts are greatly reduced.

Although a bi-directional lane takes up less space than two uni-directional lanes, this may still require the carriageway to narrow down to a single lane at constraints, with motor traffic giving way to oncoming traffic, or if that proves to be infeasible then a traffic signal controlled section of alternating-direction one-way working. 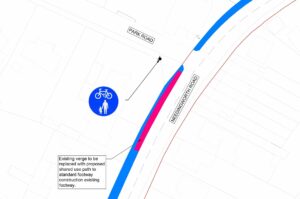 The county council is proposing to convert the western footway of Needingworth Road into a shared-use pavement, between Tenterleas and Saint Audrey Lane. The above diagram shows one subsection of the scheme, near Park Road, where the existing verge will also need to be converted into shared-use pavement. The rest of the scheme is very similar.

We are disappointed to see the county council proposing a scheme that simply converts a footway into a shared-use pavement along Needingworth Road in St Ives. This scheme is a throwback to the bad old days of car supremacy and ‘getting cyclists out of the way’ of car drivers.

We strongly oppose this shared-use pavement scheme and recommend that it be replaced instead with a proposal to install a modal filter somewhere along Needingworth Road in order to open up the road for safer walking and cycling as well as improving living conditions for local residents and reducing traffic congestion and pollution overall. While local motor vehicle journeys would still be able to use Needingworth Road for access purposes, we expect that motorised through-trips would switch to using the nearby A1096 Harrison Way, which runs nearly parallel.