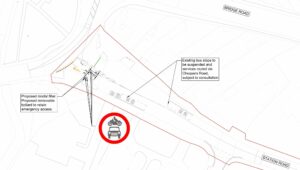 The county council has proposed to put an experimental modal filter on Station Road in Histon just north of the Baptist Church driveway, near the war memorial. This would maintain motor vehicle access to all properties while deterring motorised ratrunning traffic from using Station Road. This would effectively protect the street from drivers who divert from the B1049 at busy times and race through the smaller street to try and beat the queues at the traffic signals.

We believe the experimental modal filter would reduce overall traffic congestion and open up the road to much safer conditions for people walking and cycling there. The downside is that some car journeys may take a minute longer, although this should be balanced by the fact that local car journeys are much less likely to caught in congestion and many local residents will feel much safer about leaving their car at home and taking their family on foot or cycle.

One significant issue that will require substantial local consultation is to figure out what to do with the Citi 8 bus stop that has to be moved under the current proposal.

At a glance, the issues with the Citi 8 bus stop are:

Some options to deal with the bus route issue are:

More good discussion can be found at this blog post.

We are very supportive of the experiment but expect that the consultation will need to flesh out ideas for resolving the issue with the bus route. There are significant benefits for the area, such as reducing traffic and pollution, and we believe that a trial of the experimental modal filter in some form is very worthwhile.