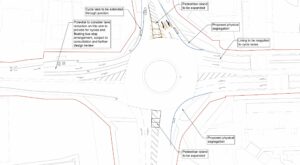 The county council have proposed to make some small adjustments to the roundabout at Barnwell Road, Newmarket Road and Wadloes Road, sometimes locally known as the McDonald’s roundabout. The changes would narrow the Wadloes Road and Barnwell Road arms a little bit and slightly improve the pedestrian crossings by widening the refuges.

This roundabout is infamous for being one of the most dangerous places in the county. Last year a driver killed an octogenarian cyclist who was trying to traverse it, and there are numerous injury-causing collisions every year. Therefore we had expected the county council to come up with an ambitious scheme for safety improvements. Sadly, that does not appear to be the case.

What they have proposed is very little. There does not appear to be any change to the extremely dangerous and narrow ‘central’ cycle lanes on Newmarket Road other than repainting them. This scheme is simply putting lipstick on whirling death machine.

We want to be able to support a serious intervention to this roundabout because it is badly needed. However, we cannot support the proposed scheme as it is, given its barely perceptible benefits. There is simply no reason for this junction in the midst of populated urban area to be designed as a bone-crunching high-speed multi-lane roundabout.

There is a little bit of road-space reallocation in the form of lane narrowing and refuge widening, but it does not significantly change the status quo and will not make the roundabout safer for cycling. The resulting roundabout would still be very far away from compliance with LTN 1/20. Therefore we believe that the county’s current proposal does not qualify under the DfT’s guidelines for funding.

Given the limitations of the active travel programme, we know we cannot expect a full reengineering of the junction. However, it would be possible to use temporary barriers to narrow the roundabout down to a single lane circulatory carriageway with single lane entries and exits all around, more in compliance with LTN 1/20. The reclaimed space could be used to provide fully accessible and much easier to use informal crossings of each arm. We strongly urge the county to return with a scheme along these lines, for the safety of the community and all road users.

Also, residents have long been complaining about the problem of traffic using Wadloes Road to queue for McDonalds, asking that action be taken. We believe this scheme ought to be an opportunity to fix that problem, by narrowing the carriageway in order to force vehicles not to queue. We support residents in their campaign to see the problems here resolved.

Furthermore, the cycleway alongside Wadloes Road gives way to the McDonalds entrance – this should be changed so that the cycleway explicitly has priority over the driveway and it may also need ‘keep clear’ markings, to dissuade drivers from blocking the cycleway and footway when queuing.