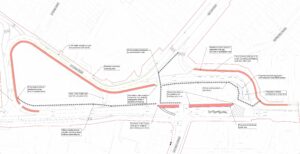 The county council is proposing to tackle some of the worst problems at Mitchams Corner with low-cost, rapid improvements using temporary changes to roads. This includes reducing the excessively wide carriageways using temporary barriers and pavement expansions to create more space for walking and cycling in several places. The scheme also proposes to reallocate significant amounts of carriageway into protected cycle lanes, alleviating some of the worst pinch points on the shared-use pavements by providing separate and expanded space for pedestrians and cyclists.

We are pleased to see that the council is finally putting forward proposals to do something in the short-term about the problems at Mitchams Corner. Much of the Mitchams Corner gyratory has two (or more) lanes, which is far too much for the amount of motor traffic that actually uses it. As a result, we see many drivers speeding while pedestrians and cyclists are squeezed onto inadequate shared-use pavements. 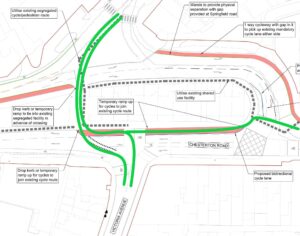 The cycle route between Victoria Avenue and Milton Road is greatly relieved by converting part of the northernmost lane on Chesterton Road into a 2-way cycleway so that cyclists using the Toucan crossing of Chesterton Road can stay away from the narrow part of the shared-use pavement. It also allows people to cycle the more logical desire line eastbound staying straight along Chesterton Road.

The closing of the U-turn facility that currently splits the gyratory is also a welcome expansion of public space and safety improvement for people walking and cycling in front of the Lloyd’s Bank. 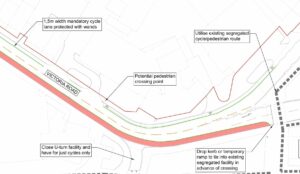 The narrowing of Victoria Road as it leads into Milton Road (shown above) is also really important, because that wide stretch of road is currently one of the worst spots for speeding, and drivers come around the bend very fast as they approach the Toucan crossing across from the Milton Road Co-op. By reducing the crossing distance to a single lane, it will be much safer for pedestrians and cyclists.

We agree with the need for protection on these bends where drivers tend to cut up cyclists or park illegally. However, we believe that wands will be insufficient, as those are easily knocked over by cars. Therefore, strongly barriers will be needed to physically segregated these lanes and the cycle lanes will also have to be wider so that they are fully usable by all types of cycles. 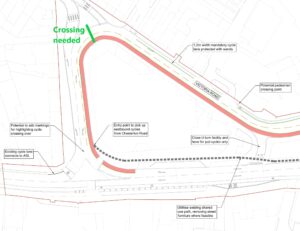 The purpose is unclear for the proposed new cycle lane on the western half of the gyratory, curving between Croft Holme Lane and Victoria Road (shown above). It would make more sense if there was a crossing at the northwestern corner so that people could more easily access Victoria Road. Then it would serve currently unmet desire lines between Milton Road/Chesterton Road and Victoria Road.

Yes, there is road-space reallocation and some protection of cycle lanes. We believe that low-cost and high-benefit improvements are still possible to the scheme.

Ideally, the gyratory would be entirely replaced by a more appropriate crossroads with wide pavements and separate cycleways. However, that would require intensive engineering and many years to consult and construct. In the meantime, the most significant change that can be made within the existing gyratory is to reduce all of the one-way sections of carriageway to a single lane of motor traffic using temporary barriers. 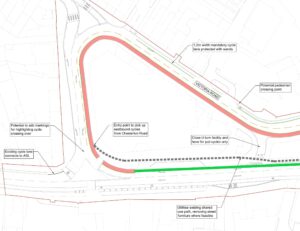 There are also some remaining sections of shared-use pavement that could stand to be replaced with separate cycling and walking provision using lightweight segregation, such along Chesterton Road approaching Croft Holme Lane as shown by the green line in the diagram above. With a little more work, the parking and loading bays could be arranged to provide protection for the extended cycle lane.

However, overall, we are strongly supportive of the Mitchams Corner scheme and would like to see it further developed and implemented rapidly in order to improve the area for walking and cycling.