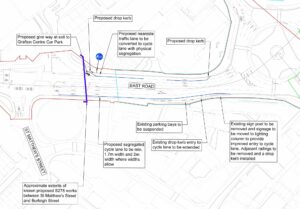 The county has proposed a series of minor changes to East Road but the more significant changes occur to the north of St Matthew’s Street (shown above), where they propose physically segregated cycle lanes along a particularly wide stretch of road. Overall, these are useful improvements but the scheme could be much improved.

Southbound, the existing cycle lane would be slightly widened and provided with some sort of protection, but the three lanes of general traffic would remain. Northbound is more ambitious, where one of the three carriageway lanes would be converted into a protected cycle lane, starting from the Grafton Centre car park exit. This would have the benefit of providing more space for pedestrians by shifting cyclists onto a better on-carriageway facility. However, the new cycle lane would end short of the roundabout, and unfortunately no modifications are proposed for one of the worst junctions in Cambridge, the Newmarket Road / East Road roundabout. 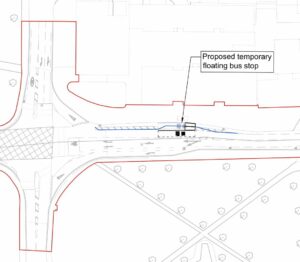 It is hard to say whether the temporary floating bus stop is helpful without seeing any detailed design for it, because the details are really important for making sure that the floating bus stop is comfortable and fully accessible for all pedestrians and cyclists. There is, however, plenty of space here, and addition of physical measures to prevent stopping in this area would help crack down on illegal parking on the yellow lines. In addition, we suggest the provision of a floating loading bay close to the bus stop, to provide a safe place for delivery vans to stop without blocking the cycle lane.

Between Burleigh Street and St Matthew’s Street the scheme defers to an already-agreed design that was included in the planning application for the redevelopment of the bus turning area in front of the Grafton Centre, and therefore does not form part of this scheme. However, there seems to be no assurance of when this section will be delivered.

We are tentatively supportive of this scheme because it will introduce some length of physically segregated cycle lane north of St Matthew’s Road. However, that could have been done better. The proposed 1.7m southbound cycle lane will feel a bit too narrow when there are physical segregation measures installed. There is no need for three southbound general carriageway lanes on East Road, that space could have been reallocated to more cycling and walking space.

Does the proposal meet DfT guidance?

Yes, they are reallocating some road space and putting some protection measures in. However, these changes lead into the extremely problematic East Road / Newmarket Road roundabout without any improvements currently shown there, which significantly weakens this scheme’s merit because it does not form a joined-together network. One of LTN 1/20’s core principles is ‘coherency’, which this proposal currently fails.

The biggest disappointment is that there is no attempt at fixing the most dangerous part of the road: the roundabout. They could have set up temporary cones and barriers to reallocate road space on the roundabout in order to create more space for walking and cycling there. In fact, the county has done such a thing in the past, including last summer for a few days. They set up all the cone and barriers necessary to reallocate space on the roundabout during the course of one summer evening, and then took it all away a few days later. It was, apparently, all part of a maintenance scheme – but it could have easily been left in place and turned into an active travel scheme if they just made some small changes to the layout in order to ensure full accessibility for disabled people. It is a real shame that the county does not have joined-together thinking on this matter.