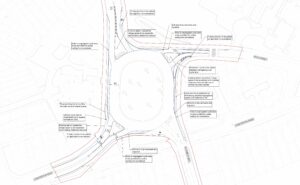 The county council has made some proposals for tweaks to the massively oversized roundabout at Chesterton Road and Elizabeth Way.

We are disappointed in the lack of ambition given the amount of space available.

The proposed scheme includes some minor shrinkage of the circulatory carriageway, perhaps a metre or two at most. Some of this space will become expanded pavement, other parts will be used for cycle lanes with lightweight protection (wands). This roundabout shrinkage seems to be a bit underwhelming given that it will still leave behind at least 8.6m of circulating carriageway width; more than enough for three cars to drive side-by-side. LTN 1/20 specifies roundabout designs with 4.5m to 6.0m of circulatory carriageway width, therefore it seems there are another couple metres of reduction that could be achieved here. That would help reduce speeds and make the roundabout safer overall.

On the more positive side, the proposed scheme does include significant amounts of entry and exit lane width reduction, and there appears to be an attempt to reshape the geometry of the entries and exits so that they cause more deflection to entering and exiting drivers. That will help bring down speeds. Some of the reclaimed space has been used to widen pedestrian refuge islands and in general make crossing distances much shorter. This is all good.

What’s missing? Well, there are still not really any safe routes for cyclists who want to take the second or third exit after they enter the roundabout from any direction. The aforementioned protected cycle lanes really only help people who are taking the first exit and hugging the kerb.

Another thing that is missing is any improvement to the Toucan crossing of Elizabeth Way (southern arm) along the line of the original Chesterton Road. This crossing is obstructed by several dangerous barriers that force cyclists and pedestrians into conflict at blind corners on the pavement. The barriers are also inaccessible to some disabled cyclists. Such barriers are explicitly forbidden by LTN 1/20, and removing them would be a doddle, so it is a strange omission.

We are supportive of the general direction of this scheme, but much work remains to be done.

The proposed scheme includes some road space reallocation to expand pavements and reduce crossing distances, therefore it complies with the DfT guidelines, but there are some really big missed low-cost opportunities here to improve cycling. Without incorporating the changes that we suggest below, the benefits are going to be rather limited.

In the short term, additional space reclaimed from the carriageway using temporary barriers can be turned into segregated cycleways that lead up to widened informal crossings of each arm. Thanks to the narrowing of the exit and entry lanes these will be much safer and easier to cross. The southern Elizabeth Way arm can rely on the existing Toucan crossing instead of an informal crossing. However, some further clutter-busting will need to be done here, both to remove the dangerous and exclusionary barriers, as well as to tie into cycle lanes coming from the roundabout itself.

In the long run we would like to see this entire junction redesigned so that a huge amount of public space can be reclaimed (the central island is quite a nice bit of parkland, it is a shame that it is inaccessible to all but the brave). The massively oversized roundabout could be replaced by a much more compact, LTN 1/20-compliant, Dutch-inspired roundabout with segregated cycleways all around. Then generously-sized public green spaces could be situated around the outside of the roundabout. However, that will take many years to consult, design and construct.