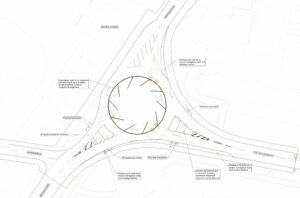 The county council is proposing to reduce the size of the carriageway around the Newnham Road / Fen Causeway roundabout (confusingly being called the Barton Road roundabout), as well as the roads leading into it. This will improve safety by slowing down traffic speeds and making more space for pedestrians.

The existing roundabout at the junction of Newnham Road and Fen Causeway is massively oversized and therefore it is a prime candidate for changes. What should be a relatively minor roundabout was instead built with multiple lanes and high-speed geometry, as if the 20th century designers expected there to be a motorway cutting across the Coe Fen. Well, perhaps they did, but that was foolish of them. Now that we know better, the proposed scheme has made a good start by bringing the roundabout down to a much safer and more reasonable single-lane design.

Expanding the centre of the roundabout does not create any more useable space for people walking or cycling. Removing the outside lane however could free-up space that could be used for better purposes.

In essence, those changes would give the roundabout a shape much more similar to the one built in 2015 at Radegund Road. This is called a ‘compact roundabout’ by UK highway engineering manuals, and it is more appropriate for an urban area where speeds should be kept low. In both of these schemes, the county has successfully established that tighter road layouts are possible and work fine for longer and large vehicles too.

The main flaw of the Radegund Road roundabout is that the shared-use pavements around it are not fit for purpose. This problem was rectified in the design of the newest roundabout at Fendon Road, however that solution will probably not be possible to achieve with the kind of cheap and rapid interventions needed by the active travel programme. So we are not raising our expectations to that level. Speed reduction through roundabout carriageway narrowing is the key goal that can be achieved in the short timescale.

Yes, it is reallocating road space in favour of pedestrians, but the design could still be improved substantially.

Overall, we support this scheme because it is an improvement over the status quo, but would propose that the design changes be more in line with the ‘compact roundabout’ style rather than what is currently shown, and we believe the cost would be about the same.