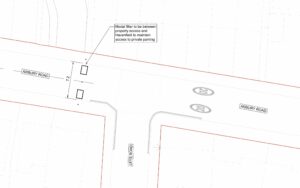 The county council has proposed an experimental modal filter on Arbury Road at a location just to the northwest of Leys Road. This would maintain motor vehicular access to all properties while opening the road for people walking and cycling.

This experimental scheme would be absolutely transformative for cycling and walking in North Cambridge. Arbury Road is a key link between King’s Hedges, Arbury, Chesterton and the river. It also serves two schools that are located on the road and is used by children heading to several other nearby ones. Sadly, the eastern end of the road is a narrow potholed morass of speeding motorists and bumpy pavements. 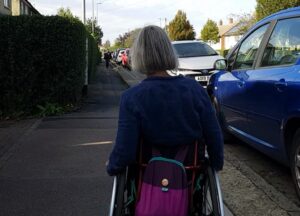 It can be difficult to cross the road or even walk along it, especially if you are using a mobility aid. 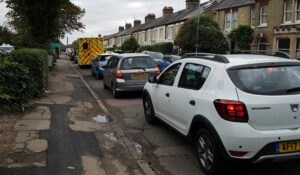 At busy times, the queue from the traffic lights backs up for hundreds of metres, as satnav systems direct too many drivers down the narrow street. The backlog of just a couple of dozen cars makes cycling difficult, increases pollution in the area, and causes delays to emergency vehicles.

Furthermore, the excessive number of cars rat-running down Arbury Road causes delays to buses on Milton Road, because the traffic lights have to show red to Milton Road for a long time while Arbury Road takes up a lot of green time.

This scheme proposes an experiment to try and fix all those problems, and along with the Union Lane scheme we believe that it would reduce traffic overall across North Cambridge and encourage drivers to stick to the main roads rather than cutting through minor ones. Arbury Road would return to being a safe and neighbourly street instead of being a racetrack dividing the community as it is today. The only downside would be that some car journeys might take a few minutes longer, but even that may be balanced by the fact that local car journeys will no longer get caught in traffic caused by regional drivers cutting through, and more residents will feel safe to walk or cycle with their families instead of taking their car for short trips. The potential benefits mean this is well worth a trial – it is the only way to find out how well it works.

Past proposals for experimental modal filters on Arbury Road have received significant support from the local residents’ associations. We also strongly support this experiment.

Our only additional suggestion to this experiment is that it also incorporates timing changes at the Milton Road traffic signals to ensure that buses can take advantage of additional green time on Milton Road. This can be integrated with any changes made as part of the Union Lane scheme as well. 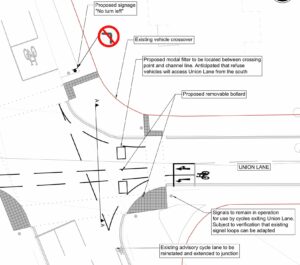 The county council has proposed an experimental modal filter that would be placed at the very end of Union Lane next to Milton Road. The effect of this modal filter would be to maintain motor traffic access to all properties on Union Lane (via Scotland Road and High Street) while opening up the road for much safer walking and cycling. 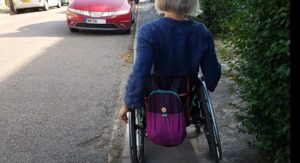 The road is very narrow and the pavements are extremely narrow and almost completely impassable for people using mobility aids. So this scheme is very welcome because it would take away rat-running drivers, traffic-calm the street and reduce traffic in the overall area. People walking and cycling would be able to safely share the street with the relatively small number of local car journeys accessing properties along the street. In combination with the Arbury Road scheme and the Church Street scheme, this would create a safe, coherent and direct active travel link between Arbury, King’s Hedges and the river. The potential benefits are very high and well worth trialling.

We strongly support this experimental scheme. We suggest that, in combination with the Arbury Road experiment, the traffic lights at the Milton Road junction can be reasonably retimed to provide some additional bus priority on Milton Road.

We recommend two minor modifications to the proposal:

In the longer run, should this experimental scheme be made permanent, then the pavement can be made continuous across the former mouth of the junction and landscaped nicely, similar to the arrangement at Chesterton Hall Crescent (albeit with a better-designed cycle link, we trust). 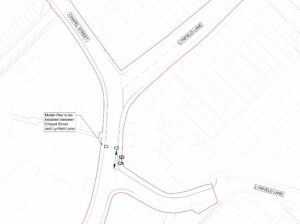 The county has proposed an experimental modal filter on Church Street in Chesterton that would maintain motor vehicle access to all properties while improving conditions for people walking and cycling between Chesterton and the Riverside bridge, among other areas.