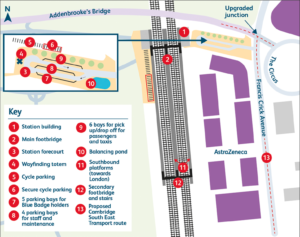 Network Rail is developing plans for a new station in the vicinity of the Cambridge Biomedical Campus. The new station is expected to open in 2025 and Network Rail has been consulting on the access arrangements and the cycle facilities proposed at the station.

The current proposals are for a station alongside the tracks and include space for 1,000 cycles arranged on both sides of the railway using a variety of Sheffield stands, two-tier racks and parking for non-standard cycles.

Overall, the proposals for the new station are inadequate for the expected volume of people who will use it and do not allow for expansion. The cycle access to and through the station area is insufficient and 1,000 cycle parking spaces are unlikely to be enough. The layout of bus stops, entry hall and platforms will make walking distances unnecessarily long. The narrow staircases will become congested at peak times. It is unclear whether the vexing issue of cycle parking security has been considered from the start. It is disappointing that, yet again, lessons have not been learned from the problems with Cambridge and Cambridge North stations.

Camcycle agrees with the conclusion of Smarter Cambridge Transport and Railfuture that the community would be much better served by a station on a deck over the tracks with facilities above the railway, as well as a new cycleway over the tracks separate from the existing bridge. Such a new cycleway over the tracks could directly link with cycle parking facilities incorporated into a station on a deck, providing a very convenient and efficient travel hub similar to that which has been achieved at many railway stations in the Netherlands.