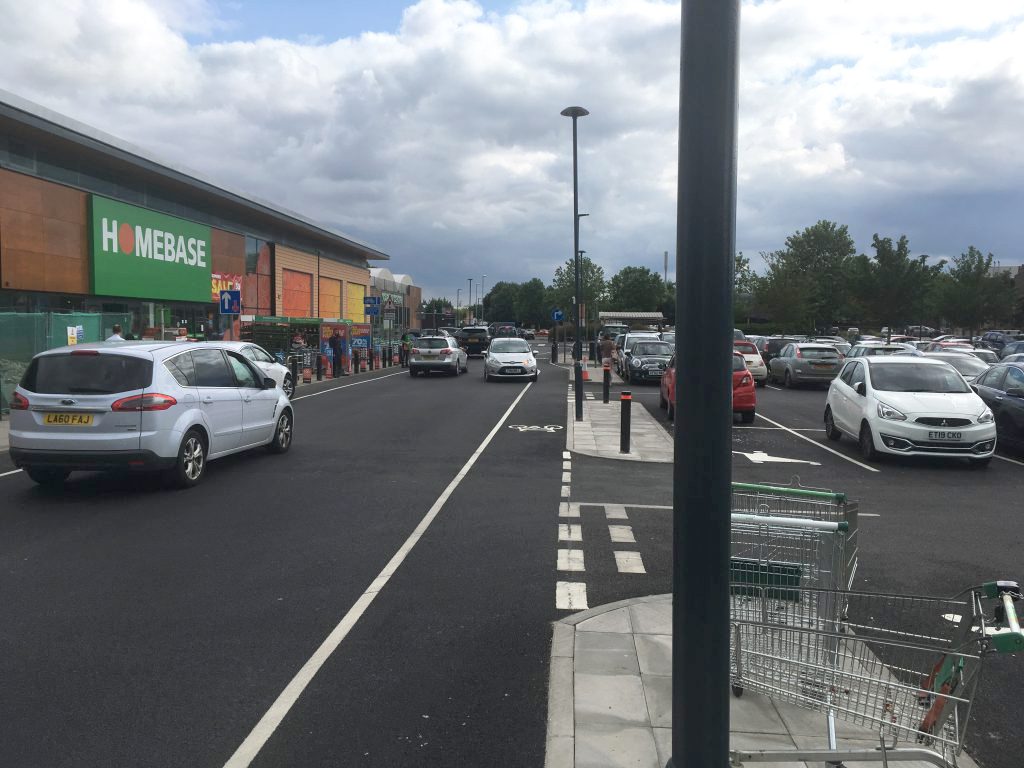 The 2002 planning permission for the Cambridge Retail Park (CRP) required the installation of a rising bollard in front of Homebase. The purpose of this bollard was to prevent motor traffic from rat-running through the car parks, while still allowing a bus route to go through. The combination of bollard, an elevated pedestrian crossing and a bottle-neck that limited traffic to a single vehicle at a time was essential for the safety of people walking and cycling here. A marked cycle lane was a part of this arrangement and contributed to a safe route away from car traffic that connected Coldhams Common and the river Cam.

More recently, CRP repaved the parking area, partly due to the arrival of a new tenant (Lidl). In the course of this work, the remaining width restriction was removed, and there is now an unauthorised two-lane passage that offers an attractive rat-run around the often congested intersection of Newmarket Rd and Coldhams Lane. Some of our members filed a planning enforcement request against the unauthorised establishment of a new roadway contrary to existing conditions. The council should pursue this planning enforcement action.

In the meantime, CRP has filed a retrospective planning application (reference 19/1500/S73) to try and rubber-stamp their imprudent changes. Within this application, on a transport statement riddled with errors and ignoring peak time traffic flows, they admit that 1,214 cars per day are using the unauthorised connection between the car parks. According to locals, the number of near-misses between shoppers and rat-running traffic is increasing, and will only get worse as Sat Nav systems catch up with the change. However, this is a private street: there is no crash data collected, nor are the police able to stop speeding motorists here.

It’s not a done deal: the planning application has to go in front of the planning committee to be considered. We recommend that anyone concerned about this should file an objection on the planning website or simply write an email to applicationsupport@cambridge.gov.uk, quoting reference number 19/1500/S73, expressing your objection to this application. Please also copy the local councillors for the area, Richard Johnson, Nicky Massey and Haf Davies.

Here are some talking points:

Should the retrospective application be approved, it sets a terrible precedent for the removal of vital safety infrastructure and degradation of public cycle routes at the whim of unaccountable developers. The CRP is most welcome to get involved in local transportation planning, but they should follow the law and consult with stakeholders about improvements needed for cyclists and pedestrians. Opening a rat-running course for thousands of cars on private land is a poor start.