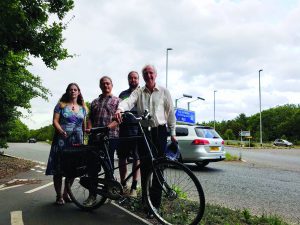 Earlier this week, we sent a letter to Jim O’Sullivan, Chief Executive of Highways England responding to and elaborating on remarks he made at the Parliamentary Transport committee on 23 October. Throughout 2019, we have been campaigning to get Highways England to take seriously its responsibility to non-motorised road users, working with Cambridge MP Daniel Zeichner to get the issue raised at a national level.

We are concerned about dangerous junctions and crossings that are being designed and built as part of Highways England’s schemes across the country, but especially here in Cambridgeshire on the A14 scheme and the forthcoming A428 proposals. There are also many problems with their recent approach to road works, which have left people stranded with no safe cycle route, forced to mix with heavy motor traffic on major roundabouts and junctions.

It’s especially frustrating to see this happening because Highways England had supposedly committed to a cycling strategy back in 2016, and incorporated stringent design standards to ensure that people cycling would be treated fairly and safely. Those design standards, known as Interim Advice Note 195/16, were introduced in 2016, but as of as of last month they have been officially incorporated into the Design Manual for Roads and Bridges under section CD 195. All of the examples above fail to meet the standards laid out in CD 195 and we know of numerous other places where this is also the case.

We have learned from Highways England project management that they have explicitly chosen not to follow the standards because the pathways are ‘shared-use’ and not purely for cycle traffic. However, this argument doesn’t make any sense, because people will be cycling there, so the pathways have to be made safe for cycle traffic. Furthermore, the designs that they have chosen and built are also dangerous for people walking and riding horses. Trying to cross a wide, busy roundabout exit on foot or horseback when cars are bearing down on you at 50 miles per hour is extremely dangerous and difficult. Although it is titled ‘Designing for Cycle Traffic’, the standards contained in CD 195 require designs that are much safer for all people, no matter whether they are walking, cycling and riding horses.

In the letter we have written that ‘drivers rightly expect consistent quality and safety from Highways England roads, and the same should be true for cycling infrastructure’. Highways England engineers would never design a road that was dangerous for motorists to use, just because sometimes people walked or rode horses on it too.

Therefore, we have asked Chief Executive Jim O’Sullivan to investigate why cycling provision has not been consistent with the standards, how this may be remedied and how problems with standards compliance may be prevented in the future.

You can help highlight this campaign by sending your own letter to Mr O’Sullivan, adding issues of concern in your area. The address for correspondence is Highways England, 1 Walnut Tree Close, Guildford GU14LZ (email: info@highwaysengland.co.uk). In addition, please post your comments and images of dangerous junctions and crossings to social media using the hashtag #safehighwaysforengland and tagging @highwaysengland into your posts.