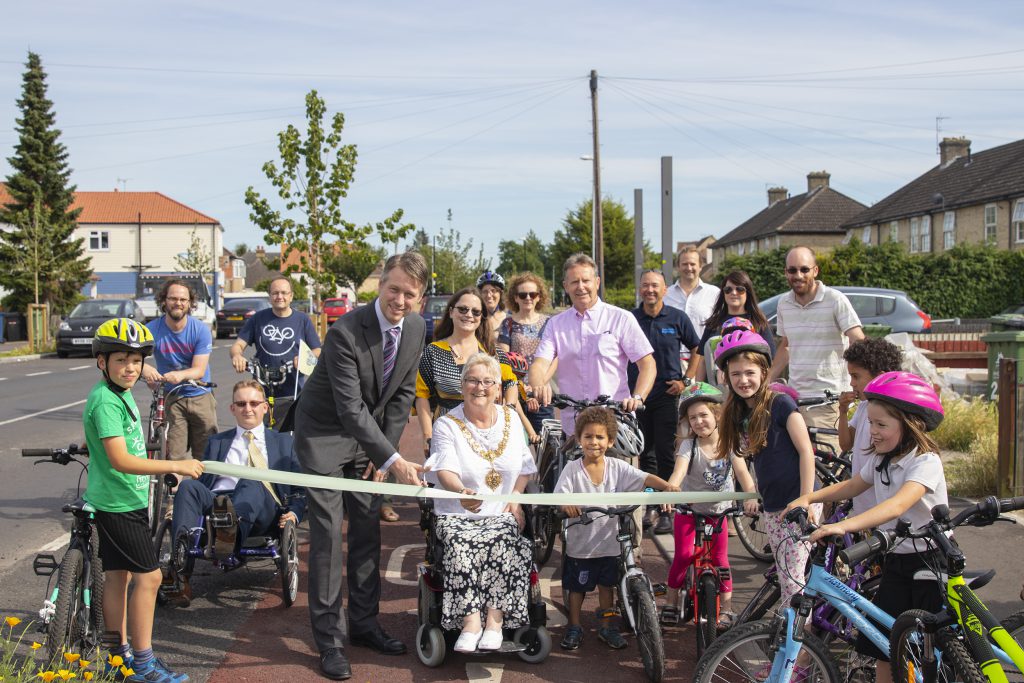 A new street layout for Cambridge’s Green End Road was officially opened on Thursday 4 July with a happy crowd of young people eager to try it out. Amidst the group of councillors, officers and local residents who had gathered for the ribbon-cutting ceremony were children as young as two and three, now able to cycle safely along the red tarmac on new kerb-protected cycleways.

The scheme is part of the Cross City Cycling project funded by the Greater Cambridge Partnership, which seeks to improve cycle links to schools and employment centres. As well as the new protected cycle lanes, it has improved Green End Road across the whole width of the street with smoother pavements and road surfaces, an upgraded zebra crossing, new bus stop bypasses and green planting between the road and cycle lanes. The cycleway also has priority over side roads with a set-back design giving drivers space to give way after turning in from the main carriageway. This layout is the first example of its kind in Cambridge, but is common in cycle-friendly places such as the Netherlands and growing in usage in other locations across the UK. 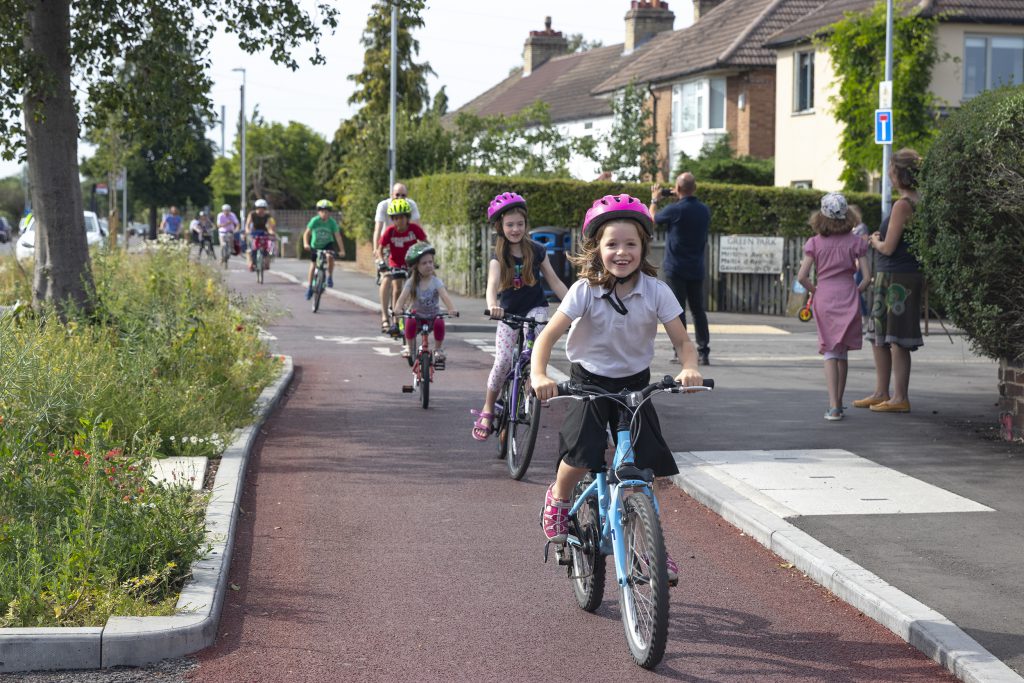 Camcycle has long campaigned for Dutch-style infrastructure in Cambridge and welcomed the new protected lanes. Camcycle’s Communications Officer, Anna Williams, who lives and works in the area, said “Green End Road is both a residential street and a key commuter link and this scheme delivers for both, with improved facilities for pedestrians and cyclists and a more attractive street for residents. Evidence shows that liveable street designs like this not only allow cyclists of all ages and abilities to travel safely, but also improve social cohesion in the local community. This is a great example of the type of urban design we’d like to see as part of an integrated network of protected lanes and healthy streets across the city.”

Councillor Aidan Van de Weyer, Chair of the Greater Cambridge Partnership, who cut the ribbon with Cambridge Mayor and East Chesterton Councillor Gerri Bird, said “The Links to Cambridge North Cross City Cycling scheme will help to make it safer and more appealing for to people to leave their car and get around on their bike. This is one of 18 major cycling projects and other improvements being delivered by the GCP as we expand and enhance Greater Cambridge’s first-class cycling network and look to cement our standing as Britain’s top cycling city.”

The original concept for the scheme was born out of an idea to ‘Green Up Green End Road’ by County Councillor Ian Manning, who began a series of community workshops in 2012. Councillor Manning was pleased that the community’s vision had been maintained throughout the project despite several setbacks and challenges. He stressed the importance of working with both residents and commuters on street improvement schemes and said “The end result is high quality cycle lanes for cyclists, a greener environment for residents and more space on the pavement for vulnerable pedestrians”.

More new cycle lanes will be opened soon by the Greater Cambridge Partnership in the north of the city, on Arbury Road.

All photos in this post are © Greater Cambridge Partnership