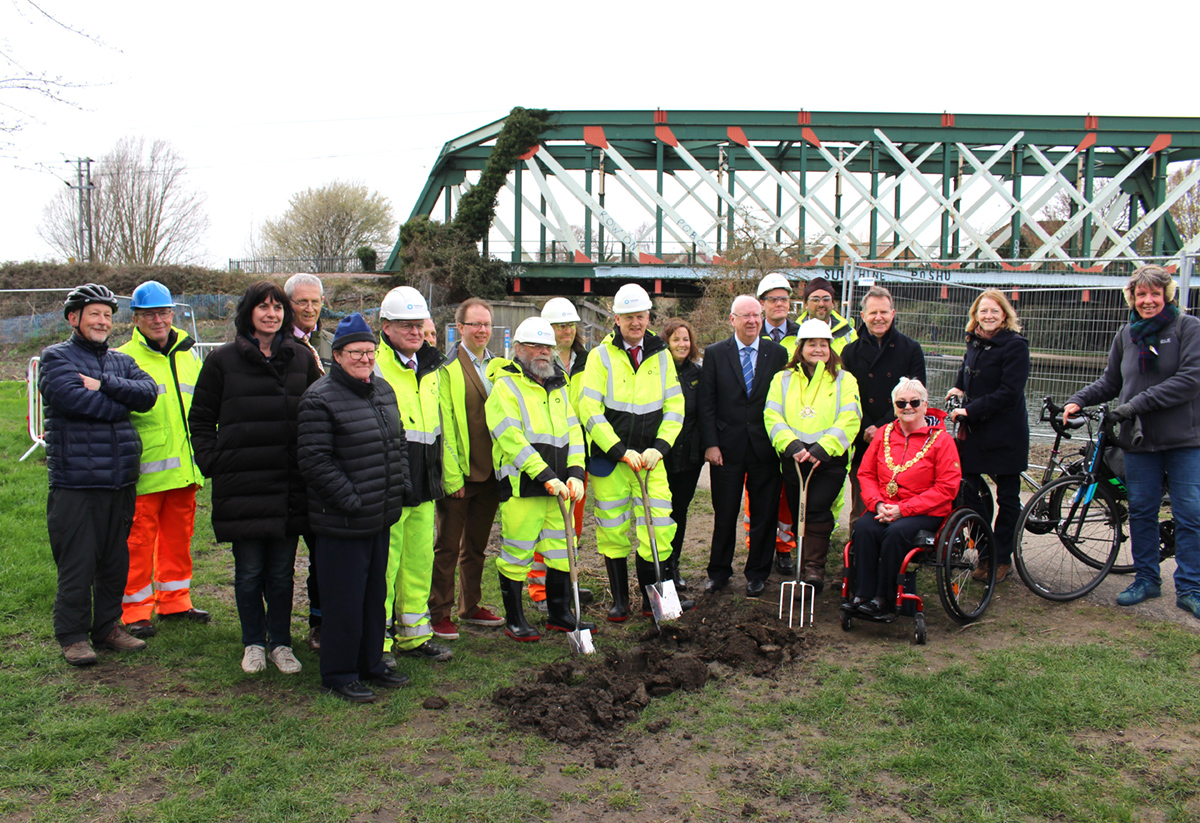 It’s been over 20 years in the making, but today the long-held dream of Cambridge resident and cycle campaigner Jim Chisholm is finally being turned into reality. Together with Councillor Lewis Herbert (Chair of the Greater Cambridge Partnership and Leader of the City Council) and Councillor Mandy Smith (Chair of Cambridgeshire County Council), Chisholm broke ground on the Chisholm Trail cycling and walking route at an official start-of-works ceremony on Ditton Meadows near the site of the new Abbey-Chesterton river bridge.

Beforehand, he paid generous tribute to some of the other people who had brought the project to life including county cycling officers Clare Rankin and Patrick Joyce, and John Grimshaw, founder of sustainable transport charity Sustrans. The trail will provide a mostly traffic-free route between Cambridge’s two railway stations, connecting users to homes and jobs in the north and south of the city via existing sections of the busway cycleway. It will also link up some of the city’s green spaces, allowing more residents to spend time enjoying the historic Leper Chapel or strolling through wildlife-rich areas such as Stourbridge Common and Barnwell Lakes. The ecology of the area has been carefully considered throughout the project, with schemes currently in place to protect creatures including lizards, bats and water voles from the upcoming works.

Chisholm believes the Trail will not only help more people travel in an environmentally-friendly way, but provide vital benefits in terms of health. He said, “Good quality cycle routes and walking facilities offer a good alternative to driving and keep those who use them fit, with just a little effort. The real buzz for me will come when there are regular users on the Chisholm Trail – not just cycle commuters travelling from Milton to work at Addenbrooke’s but also those on foot who can explore the new connections between Cambridge’s valuable open spaces. Be we eight or eighty, these activities can improve our physical and mental wellbeing.” 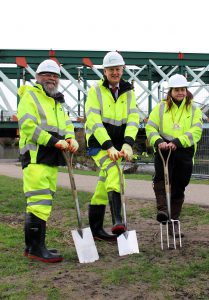 He also praised members and volunteers of Camcycle, the Cambridge Cycling Campaign, who have given so much support for his vision, since it was originally proposed in 1998. Camcycle’s Executive Director, Roxanne De Beaux, said, “We are so proud of what our volunteers have achieved through their work for more, better and safer cycling. Thanks to Jim’s dedication, the Chisholm Trail will offer a safe route through the city for all ages and abilities. We can’t wait to see the first users enjoying its benefits.”

Before digging a shovel into the soil, Councillor Herbert said, “It is a tribute to Jim’s fortitude that after 20 years, we’re able to commence work on this. It’s vital that we have off-road routes as well as improvements on road. It shows the benefit if people push and campaign and the value of partnerships as there are a lot of people involved in this.”

The route is expected to attract many more people to cycling and walking in the city, across all ages and backgrounds and is hoped to inspire more high-quality facilities for active travel. Chisholm finished by saying, “Much transport infrastructure tends to benefit only the better-off in society whereas that for cycling and walking can benefit all. Let us have more such quality routes.”