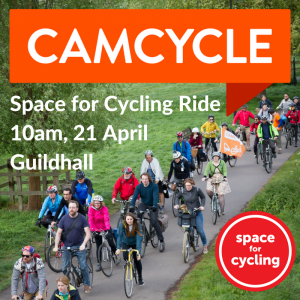 This coming Saturday, 21 April at 10am, local residents are set to gather at Cambridge Guildhall before a short ride around the city, including a stop at Cambridge Station Square, to highlight the need for more, safer and better space for cycling.

The event is led by Camcycle (Cambridge Cycling Campaign) and is supported by a number of local community groups. The Cambridge Ride is one of twelve events taking place in cities across the UK ahead of the local elections as part of national cycling group, Cycling UK’s ‘Vote Bike’ campaign.

Tom Guha, Cycling UK’s Infrastructure Campaigner, said: “That so many people are taking to the streets to demonstrate support for cycling shows that cycling is electorally popular. Hopefully candidates will listen and, if successful, act to encourage the growth of healthier, happier and more active places”.

Roxanne De Beaux, Executive Director for Camcycle, said: “This is the first year we have held a Space for Cycling event and Camcycle encourages anyone who wants to see better conditions for cycling to come along and join us. We would especially like to see local councillors and local election candidates showing their support for cycling.”

Daniel Zeichner MP for Cambridge and a member of the Transport Select Committee will also be joining the event on Saturday to offer his support. Mr Zeichner says: “Cycling is a key transport option for Cambridge – and well-maintained roads, with potholes fixed, are good for everyone: cyclists, bus passengers and motorists alike.”

A spokesperson for CTC Cambridge said: “CTC Cambridge are pleased to support the Camcycle Space for Cycling Ride on Saturday 21 April. Cambridge has a very high level of cycling and we want to see the local council invest more money in building a high-quality cycle network for all those Cambridge cyclists.

Cycling offers health benefits and improved air quality, so everyone benefits not just the cyclists.  We are calling on all our local councillors to support the Space for Cycling goals by setting a higher priority to cycling infrastructure in their future plans.  We want them to allocate more road space to cyclists and to create more cycle-friendly streets that are not dominated by motor vehicles.

If cycling is to be fun, efficient and safe for all, we need serious action from decision makers, ensuring our various modes of transport can cohabit in safe and sustainable ways. Cycling has been shown to have many health benefits – let's embrace it and give it the support it deserves!”

If you can volunteer as a marshal on the day, please get in touch contact@camcycle.org.uk.