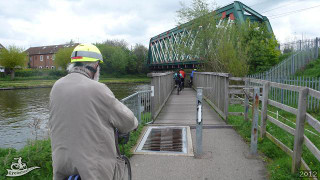 Cambridge Cycling Campaign welcomes the early consultation on a cycle- and footbridge linking Abbey ward to the Science Park station.

There is wide support for a new bridge by the railway bridge from cyclists and walkers, bringing benefits to health and the environment.

We support protecting the commons from inappropriate developments

In view of the housing developments near the airport which are within a six minutes cycle ride from the railway bridge over the Cam a marked increase to the Science Park station area is to be expected, as this area will connect to Cowley Road, the cycleway along the guided busway and the Science Park. A new bridge by the railway bridge will reduce the impact on Stourbridge Common, as it leads commuters from Fen Ditton, Barnwell, Romsey, and the eastern Newmarket Road area almost directly to the new station, avoiding Stourbridge Common and Green Dragon Bridge. 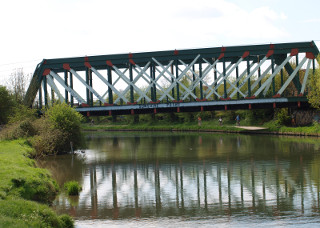 Green Dragon Bridge is no alternative

Already over two hundred people cycle across Green Dragon Bridge per hour during the morning rush and without significant modification it could not take much more. It is not well positioned for widening, an idea which would be opposed by many local residents. Widening Green Dragon Bridge to cope with increased traffic from the east of town would also require widening the Jubilee underpath. Both are costly ventures which wouldn't improve permeability.

Riverside bridge is no alternative

Riverside bridge is well used, but it is no alternative to a river crossing for walking and cycling near the Science Park Station. It is even further and would require the installation of cycle lanes on Chesterton's already heavily used High Street, for which all on street parking would have to be removed.

Saving the long detour via Green Dragon bridge. Very good for getting from Science Park area to Abbey Pool. Great permeability in general for walking and cycling between Abbey and East Chesterton.

Apart from improving and shortening commuter trips, the additional river crossing would provide opportunities for circular walks and to switch between the Haling Way and the Commons.