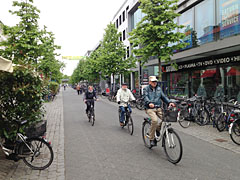 We have just returned from Oldenburg, after a few days of cycling around. Oldenburg has grown rapidly in the last few decades, and has consistently invested in bicycle infrastructure of various kinds throughout the city. Approximately 42% of people cycle in the city, and only 9% walk. This is a higher proportion of people cycling and a lower proportion of people walking. They have similar car traffic levels, and lower bus usage. There are a number of quick points however that struck everybody on the tour:

There are plenty of other things to report on, and a full report will be included in the August-September newsletter.