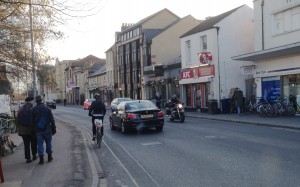 Cambridge Cycling Campaign is calling for advisory cycle lanes to be painted onto East Road during the major road reconstruction. These lanes will increase the safety of the many people riding bicycles along this route today, and possibly encourage more people to cycle instead of drive.

The state of the cycleways along East Road today could best be described as terrible. The ones that do exist are narrow, disappear for large lengths, fail to accommodate the additional space needed when people on bikes move along a curved line, and even where they exist, they hug the side of the road whilst cars have plenty of space in which to queue.

Martin Lucas-Smith, Chair of the Campaign, said, “This route is a key cycling route between the east and west of Cambridge. At the moment there are many near miss accidents that could easily be reduced in the first instance by painting basic cycle lanes on the road. Paint that can clearly show where bicycles and cars can share the space safely.”

"All this can be done by simply designing safety into the new road line markings. These proposals do not require any bureaucratic legal process, or any reduction in car lanes and parking provisions, but do require a little care and attention to detail, for virtually no cost, and thus reduce the risk of collisions for the most vulnerable road users."

Advisory cycle lanes would be a 'quick win' while resurfacing is done, but the whole Newnham to Newmarket Road stretch in future needs a more comprehensive, high-quality cycle route that would encourage a shift of people from cars to bikes. We are developing proposals for this.