The Department for Transport has just published its guidelines for Cycle City Ambition Grants. This is to fund active transport programmes (walking, cycling) for three cities in England.

Cambridge is one of two dozen cities which would be eligible to apply. The programme is to fund three well-defined, specific projects to the tune of 10 million pounds. An application from Cambridge would probably focus on the Chisholm Trail, a bike and walking connection between the station and the Science park. The guidelines, 59 numbered paragraphs (in brackets below), make interesting reading, because they challenge the traditional notion that cycling and public health have little to do with each other.

The guidelines raise the issue of "car dependency" and "sedentary lifestyles" (3). They state that the transfer of public health to local authorities (from April 2013) provides a significant opportunity to improve the integration of transport and health. They refer to the local public health budget as an additional funding source (27), emphasise the need to include least active groups (30), and seek projects which can become models for other cities. They specify high standards of segregated bicycle networks (Manual for Streets) and propose evaluation metrics that include economic models, public health benefits, and also "subjective wellbeing data" (59) through the Annual Population Survey.

The good people at DfT do seem to know their game. They do mean business. I can see nothing to disagree with here, except, of course, that the amount of money is merely symbolic. Cycle City Ambition Grants will not turn around the traffic policies which over many decades delivered the car dependency they are now trying to address. But they are important staging posts towards a change of policy and culture.

Cambridge is probably well placed to qualify for one of those grants, especially if a major project like the Chisholm Trail is at its core. Designed as a linear park which offers greatly increased connectivity, it also encourages walking, thus ticking all the right boxes. Local support is strong, the local press has embraced the project, and all political parties are keen on it. 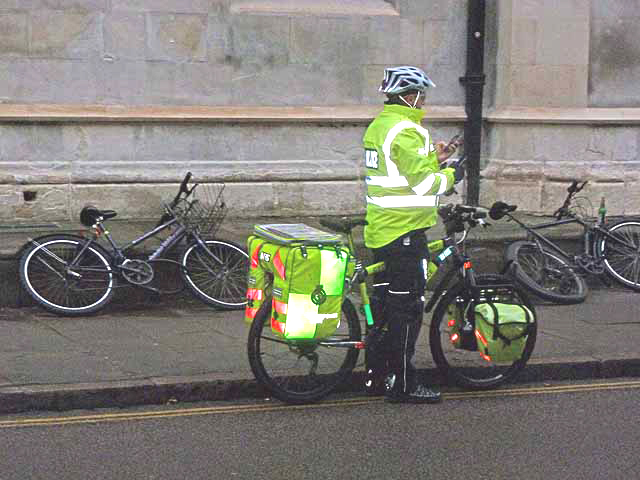 Some of the local agencies could find it difficult to join the direction of travel of this new policy. The good people from Road Safety do great work when they deliver bicycle education at schools. But because they habitually focus on the danger of cycling, they seem to inhabit a very different universe from the bicycle paradise of Ambition Grants. I recall a presentation by the Cambridgeshire and Peterborough Road Safety Partnership (CPRSP) at the Health and Wellbeing Board this January where the dangers of the use of what they called "pedalcycles" were presented without any reference to the benefits. This one-sided approach is indicative of deeply held prejudices which pose a major obstacle to the fundamental changes in attitude these Ambition Grants want to achieve.

The discourse of road safety is by no means marginal here. In order to give more people the choice of active modes of travel, to free them from their "car dependency", the public must be helped to perceive the benefits and safety of bicycle use. The impressive and overarching health benefits of active modes must be publicised more widely. But when Road Safety ponders cycling, it only worries about collisions and broken bones, and reaches for helmets and high viz, forgetting the dramatic benefits of active transport. Indeed, this is the attitude of the public in general and of those cyclists who, like most, find car traffic deeply intimidating. Occupying the same ground of anxious worry, the public health team at the county still has to develop the confidence to contradict such negative (or hysterical) discourse of cycling. Both agencies struggle with a legacy that focusses on the "danger of cycling" and finds it hard to fully embrace, in spite of overwhelming evidence, the much greater dangers of non-cycling. Given the alarming rates of obesity among children, they need to spell out the benefits of active transport for all ages, including the psychological benefits and the improved sense of community for those who can use alternatives to the car.

The DfT have written into their guidelines a number of requirements that will require Public Health partners to quit the fear of cycling and take full account of the health benefits of cycling. One local opportunity towards this important and radical change of perspective is the Oldenburg Study Tour which Cambridge Cycling Campaign is organising this May. Direct experience of solutions found in other places can help the public health team to better understand the significant opportunities in directing transport policy towards active modes.

The Ambition Grants also require a supportive letter from the director of Public Health outlining "how cycling proposals and Health and Wellbeing Strategies will be aligned" (39). It could be quite difficult to write such a letter unless the well entrenched fear of cycling is overcome, and replaced by a decidedly positive attitude towards active travel. Bids should also explain how Health and Wellbeing Boards and local public health teams will be involved in the co-design and delivery of the project. (52)

No doubt, there is much more to public health than just cycling, especially in Cambridgeshire, which includes some very deprived areas. But on the other hand, active transport is a new concept which has plenty of room to grow in local public health work. Indeed, as shown below, the textbooks from which our leading public health professionals learned their trade did not even include the term "transport impacts".

Transport Impacts: Nowhere to be seen in the public health textbooks of the 1980s and 1990s.

20 years later the scene has changed radically. Transport impacts are here to stay. The DfT includes HEAT, the World Health Organisation's Health Economics Assessment Tool as an appendix to the guidelines for the Cycling City Ambition Grants. They state: "Evidence of the overall benefits [of active modes] consistently shows that many cycling interventions score very highly in terms of benefit to cost ratios (i.e. over 4:1) and that as much as 70% of the overall benefit is derived from the health gains."

If all goes well then the Cycle City Ambition Grant will start to address a major gap in the bicycle and walking network in Cambridge, creating a direct and segregated bicycle connection between Addenbrooke's and the Science Park. It should also initiate a major, evidence-based rethink of how Public Health and Transport agencies must work together to deliver better health and better communities.