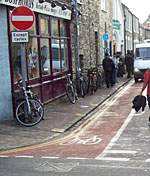 Cambridge MP
Julian Huppert secured a half hour time slot in Parliament on Friday
21 January to focus on issues about cycling. Watch
the parliamentlive.tv
recording of him in action. Read
the Hansard
transcript. Julian condemned the demise of Cycling England, raised
the dreadful cycle parking situation at Cambridge station and the
missing powers to enforce parking in cycle lanes, and the issue of
strict liability. Among
other things in her reply, transport minister Theresa Villiers
implied that No Entry Except Cyclists would be generally permitted
removing a long-standing bugbear, said that “we should be careful not
to overestimate the risks associated with cycling, in case we find
ourselves being part of the problem and deter people from doing more
cycling”, and complimented CycleStreets.