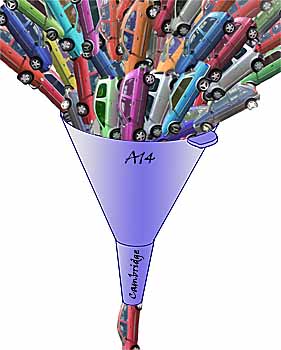 While the fact that new road surfacing material in the County consists of 10% recycled tyres warranted a press release, the Cabinet’s decision last December to shelve proposals to charge for workplace car parking apparently did not. There was no consultation on whether this plank of Cambridge’s transport strategy should be abandoned. It was just quietly put to sleep.

The workplace parking levy was the alternative to congestion charging that the Government proposed in its transport plan. The theory was that much traffic was commuter generated. Parking spaces take up valuable land and charging employers (and, possibly indirectly, employees) for this parking is a means to raise large amounts of money for sustainable alternatives like cycling and public transport. A virtuous circle.

Four years ago, the County Council dismissed the idea that traffic in Cambridge could be reduced at all, merely growth restrained. They refused to consider congestion charging. They did, however, contemplate the possibility of workplace parking charges, considered a brave move at the time, especially for a Tory run council.

Now they have abandoned that idea. So, except in the heart of the city centre, traffic restraint is now only carrot, with no stick. Indeed, in places traffic growth is even being encouraged: for example, an extra lane for cars to get out of the Science Park onto the A14. Traffic has increased by 6% in that four-year period. That means more intimidation for cyclists, more queues, more pollution.

Cambridgeshire County Council is not alone. In fact, Nottingham remains the only city still to be pushing ahead with a workplace parking levy. They face tough opposition from their single biggest employer, Boots.

The report to the County’s cabinet offered as reasons for abandoning the scheme: that the Government had given them enough money so they didn’t need the revenue from the scheme (ha ha, pull the other one), that it wouldn’t be fair (never mind the unfairness of bus fares being so much higher than the marginal costs of using a car), that it wouldn’t raise that much anyway (but this was a circular argument based on including only the central area), and that it would be hard to administer. The report did not, of course, mention any possible political backlash or the party political demographics that see our city’s transport run by politicians whose votes derive from the overwhelmingly car-oriented voters of the rest of the county.

Of course, congestion charging has been in the headlines recently with the success of London’s scheme. It’s hard to generalise from London’s uniquely large scheme to more modest cities, but it is clear that traffic has been substantially reduced (to the extent that noises are now being made that not enough money will be raised from tolls to pay for the public transport alternatives), and that cycling has substantially increased and been made easier.

Given the background it was no surprise that in the middle of July a proposal by the Labour group on the County Council to include feasibility studies into congestion charging for Cambridge was turned down.

The forthcoming widening of the A14 west of Cambridge depended on traffic restraint (‘demand management’ was a ‘key requirement’) being applied in the city. Weasel words have been used to argue that even without workplace parking charges or congestion charging, this requirement will still be met. Tell us how! We see no evidence of it, and fully expect that the consultants’ anticipated 30% increases in traffic in Cambridge will now occur. A frightening prospect. A betrayal of the basis for allowing a wider A14. And a betrayal of the city’s cyclists and pedestrians.