Bob Menzies, Road Safety and Signals Manager at the Environment and Transport department, Cambridgeshire County Council, wrote this response to Park and Ride – sustainable transport or white elephant? in Newsletter 31. Martin’s article was never intended as a statement of Campaign policy on Park and Ride – because, apart from our Local Transport Plan consultation responses, we have never formalised such a policy. However, this recent correspondence has certainly prompted much useful and interesting discussion, and so we will use some time at our October monthly meeting to consider the subject further. We thank Mr Menzies for this article.

Martin Lucas-Smith, in an article based on his dissertation, judged Park and Ride and found it wanting. At Cambridgeshire County Council we believe that Park and Ride is an effective and crucial part of delivering sustainable access and economic vitality and that Martin’s work has not considered the full facts or set Park and Ride in its wider context. 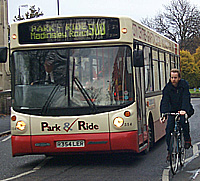 Many people are unaware of the origins of the present Park and Ride in the early 1990s. This was closely linked to a significant expansion of parking controls and eliminated a considerable amount of free on-street parking. Subsequently there have been substantial increases in parking charges, which in some cases have doubled since the opening of Madingley Road Park and Ride site in 1996. Part of the success of Park and Ride has been that it has allowed us to increase charges to pay for more Park and Ride.

Martin points out that there has not been a policy of reducing parking spaces in Cambridge city centre. However given the levels of growth in population, and economic activity, the fact that there has been no increase in city centre parking is significant.

In reality there have been small reductions in parking, with spaces being eliminated wherever a good alternative use for the space has been identified, for example in Kings Parade and Hills Road.

Martin examined a number of environmental and economic factors of Park and Ride. Effectively the data available to Martin was for a half-finished system, with the inadequate Clifton Road site still in operation. As the ring of sites nears completion, the sites expand and the number of users increases, all of these factors improve.

For example there is a concern about Park and Ride generating ‘extra’ mileage, but what has to be acknowledged is that as new sites are added there is less need for users to drive out of their way to reach a site. This has happened at Newmarket Road where users transferred from Cowley Road and we expect drivers from the south will find Trumpington much more convenient than Madingley Road.

Economies of scale have a significant impact on the bus services and the site running costs. Introducing double deck buses meets growing demand without increasing bus mileage. The running costs of each site don’t substantially change as the site expands. Madingley Road and now Newmarket Road have been doubled in size with only a small increase in costs. Thus as the sites are expanded and the usage increases the cost per user declines. It is also worth remembering that the bus services are operated commercially with no subsidy.

Park and Ride’s crucial importance in supporting the delivery of other transport initiatives such as the Pedestrian Zone, the Core Scheme and Bus Priority must not be underestimated. Not everybody shares our enthusiasm for the sustainable transport agenda. Park and Ride has greatly sweetened the pill of these vitally important traffic restraint measures for the many unreconstructed car users who are still out there.

All the indicators show that the Cambridge Transport Strategy is working. Traffic flows in central Cambridge have decreased by 10% since the implementation of the Core Scheme in 1997 and traffic flows on all the roads entering Cambridge peaked in 1996, the year Madingley Road Park and Ride site opened. This is against a background of continuing rises in traffic flows in the rest of Cambridgeshire and nationally (9% and 6% growth respectively between 1996 and 1999). This would not have been achieved without Park and Ride.

To seek to talk down Park and Ride in the belief that this would generate more funding for cycle facilities would be a grave error. The funding for Park and Ride has come through convincing Central Government of its merits and through the ‘virtuous spiral’ of on-street parking charges. At the same time we’ve been able to secure funding for improvements that promote cycling, not just in their own right but as a significant part of the measures which Park and Ride have made possible such as the Core Scheme and bus priority.

In the present circumstances of a growing pot of money there is room for us to build an equally strong case for more cycle facilities in parallel with, not in place of, Park and Ride. We should put our joint energies into this positive outcome and not into ultimately fruitless dissection of other parts of the strategy.